North Kansas City 23, Belton 3
To say North Kansas City exercised its dominance over Belton Friday would be an understatement. First, the Hornets (2-2) won the game 23-3. But Northtown put on both an offensive and defensive clinic that they could use to build on for the rest of their season.

Through three quarters, Belton (2-2) ran a total of 27 offensive plays for -3 yards, while the Hornets had run 51 for 417 yards. Defensively, Northtown was camped out the in the Pirates backfield all night long, recording nine tackles for loss and two quarterback sacks. Belton ended the game with 33 offensive plays for a total of 24 yards to NKC’s 69 and 534. Of those, 475 were on the ground.

Ezra Peterson churned out 229 yards on just 19 carries for a 12.1 average. He scored twice. Chase Porter added 110 yards on 5 attempts for an average of 22 yards per carry. He also scored twice. Mahki Staten chipped in with 94 yards.

For Belton, it was a rough night moving the ball both on the ground and through the air. Greg Lyles had 55 yards on 4 rushes.

Staley 42, Lee’s Summit West 20
Lee’s Summit West and Staley have played some memorable games over the years, but both teams have seen their struggles this year. That’s not to say that either team couldn’t get on a run in the second half and make some noise.

But on Friday night, Staley (2-2) controlled the first half, leading 19-6 at halftime. West (1-3) made a furious third-quarter comeback to take a 20-19 lead, but the Falcons added three fourth quarter touchdowns to pull away and hold off the Titans 42-20.

Cole Robertson was 15 of 27 passing for 210 yards, connecting with Andrew Genova for a 35-yard strike. But the Falcons did most of their damage on the ground. KV Stone and Don Daugherty combined for five touchdowns and 201 yards rushing.

The Titans offense finally got revved up in the third quarter, but by then, it was too late. Quarterback Drew Wolverton had a touchdown pass on 106 yards through the air. Damon Randolph was on the receiving end of that scoring pass. He ended the night with 63 yards. Quincy Torry ran for 71 yards on 11 carries.

Kearney 44, Excelsior Springs 6
The Kearney offense needed to possess the ball just 14 minutes and 48 seconds for the entire game. And in doing so, they crushed Excelsior Springs 44-6 to take control of the Suburban Blue Conference. The Bulldogs move to 4-0 on the season and 2-0 in the league.

Signal caller Casey Rooney threw for three touchdowns on 13 of 17 passing for 237 yards. His main target was Manny Linthacum. He had six catches for 147 yards and two scores, one for 11 yards and the other for 63 yards. Zach Grace nabbed the other TD pass. Three other touchdowns for Kearney came by way of Grant Noland, Danny Petree and Grace.

Odessa 57, Oak Grove 43
The scoreboard operator was busy in this one. The Odessa Bulldogs were able to hold off the Oak Grove Panthers Friday night in a wild Missouri River Valley West Conference shootout 57-43.

On the Oak Grove side, quarterback Joran Hall led all rushers with 181 yards and a touchdown. Jacob Shrout had 119 yards; Logan Pittman, 90 yards and three touchdowns; Noah Spencer, 42 yards; and Grady Salmon 28 yards and two scores.

Lee’s Summit North 38, Lee’s Summit 16
In Lee’s Summit North’s first four games of the season, three of them have been Suburban Silver Conference games. The Broncos have won all three including Friday night’s crosstown rivalry with Lee’s Summit 38-16. It puts North (3-1, 3-0) squarely in the driver’s seat for a conference title.

For the first half, this game looked like it was going to be a knock-down, drag-out battle, tied 10-10 at the break. In fact, the Tigers (2-2, 1-1) took a 16-10 late in the third quarter on an Elijah Martinez to David Dossett 22-yard pass. The extra point was blocked. North answered 32 seconds later on 69-yard strike from Maxxwell Ford to Tanner Howes to go up 17-16. Just two minutes and nine seconds later, Quade Chatmon ran it in from 18 yards out for the Broncos to put them up 24-16.

Two more Ford touchdown passes in the fourth quarter put the ballgame out of reach. He finished the night nine of 19 for 211 yards and three touchdowns. He also rushed for another.

Martinez was 18 of 33 for 258 yards and two touchdowns, but he also threw two picks. He hooked up with Dossett nine times for 139 yards and the one score. Joshua Manning had the other touchdown on 79 yards receiving. 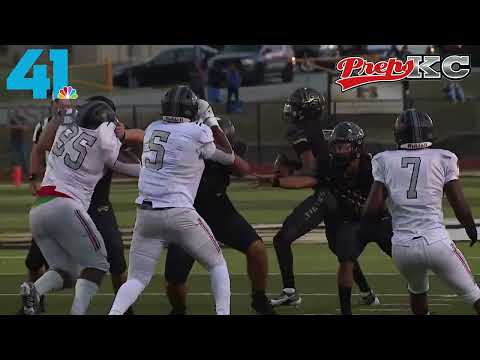