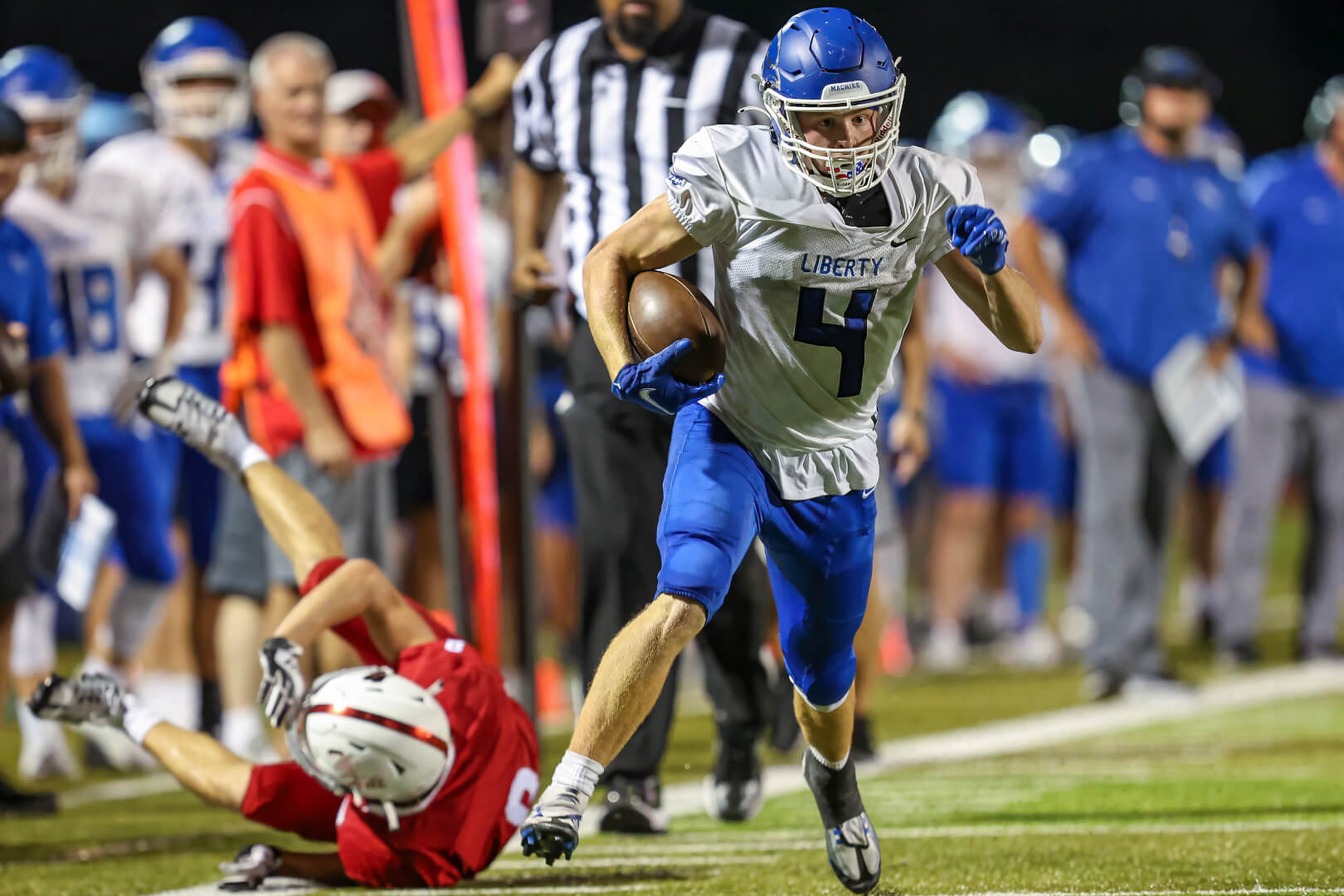 Anthony Wenson ran his way right into the record books Friday night, matching an accomplishment that hadn’t been done in two and a half decades.

The Liberty senior turned in a stellar performance with 265 yards and six touchdowns – tying a school record in the process – during a resounding 49-24 victory against Park Hill.

Wenson, an Air Force commit, scored touchdowns on the Blue Jays’ first four drives of the game, tacked on two more in the third quarter, and helped his team even its season record at 2-2. By scoring six times on the ground, he tied the school record also held by David Allen (in 1994) and Lee Thompson (1996).

“We just really executed our game plan. We came out and did what we wanted to do,” Wenson said. “The o-line got a great push all day. It was really just a team win. I know the stats look my way, but really it was a team win all the way through.”

In a matchup of 1-2 teams, Liberty took control from the get-go. The Blue Jays marched right down the field, needing only five plays for Wenson to reach the end zone for the first time. Park Hill tied the game on the ensuing drive when James Noel caught a touchdown pass from Kendrick Bell to tie it at 7-7.

But the Blue Jays would score on their next three drives, all rushing scores by Wenson, and led by at least two scores the rest of the way.

Liberty has seen a steady rotation of top-notch running back during coach Chad Frigon’s tenure, including the likes of Wentric Williams III and Robert Rawie. But Frigon said Wenson’s unselfish nature and hard-nosed running style made his big game a possibility.

“(Anthony) comes in and runs the ball extremely well, extremely hard. It was a great performance tonight,” Frigon said. “A lot of that credit goes to our running backs coach John Neldon. He really trains these guys up, and he creates these relentless running backs year after year.

“And Anthony’s one of those coachable kids that he fights for every single year. We’re proud of how he ran tonight.”

Despite trailing at halftime, Park Hill’s electric offense quickly showed its quick-strike capability. The Trojans went into hurry-up mode to begin the second half and didn’t take long to reach the end zone – when Bell slung a sidearm pass to Dayton Howard in the back of the end zone to make it 28-14.

But the Blue Jays’ defense forced a turnover on downs, followed by an interception from Ricky Ahumaraeze, to prevent Park Hill from getting any closer.

It was an impressive defensive effort against a Trojans’ team that had scored a least 49 points in each of its previous three games. Liberty certainly benefitted from the return of some of its starters who had missed the previous game because of injuries, and Frigon said forcing Park Hill to punt three times in the first half boosted the entire team’s confidence.

“It was good to get back to full strength,” Frigon said. “We talked all week about when we had those third down opportunities to get them off the field. We knew we wouldn’t get them all, but we got three in a row there.

“And that made a big difference in the game.”

Meanwhile, Noel scored his second touchdown of the game for Park Hill early in the fourth quarter and finished with more than 150 yards from scrimmage (87 rushing, 62 receiving) and two touchdowns. Bell threw for 158 yards on 17-for-27 passing and two touchdowns to go with 38 rushing yards, and Scotty Robertson finished off the scoring with a 52-yard field goal in the final minutes.

And even though Liberty faces a challenging matchup against Park Hill South next week, Wenson said turning in a complete effort against Park Hill only bolsters the team’s belief entering the midway point of the regular season.