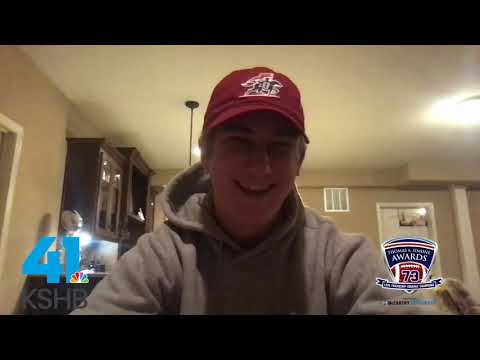 This year’s winner of the Frank Fontana Award is Jackson House of St. James Academy. The junior quarterback was announced as the best small school all around player during the 6 p.m. newscast on KSHB 41.

The Fontana Award is one of the five major awards given out by the Simone Awards presented by The McCarthy Auto Group.

"Me and my family were just sitting on the couch,” House said about watching the announcement. “My mom was down here videoing my reaction and it was kind of funny because my little brothers did not think I was going to win, so they were really surprised when I won."

House led the Thunder to its second straight Kansas Class 4A state title. St. James started off the season 0-4 but won its next nine straight culminating in a 28-21 win over Andover Central in the state championship game.

"It feels good. That was our goal all season and to get that for the seniors, it felt really good,” House said about winning the state championship.

The Thunder’s dynamic offense averaged 39 points a game in the streak after scoring just 36 in the first four losses. House finished the year with 2,856 yards passing with 25 touchdowns and just six interceptions. He also rushed for 794 yards and scored seven more TDs on the ground.

"It (winning the Fontana) felt really good because it reflects how well our whole team did because without the o-line and without the receivers, I wouldn't have been able to do any of it,” House said. “So it's really a team award, I didn't just win this."