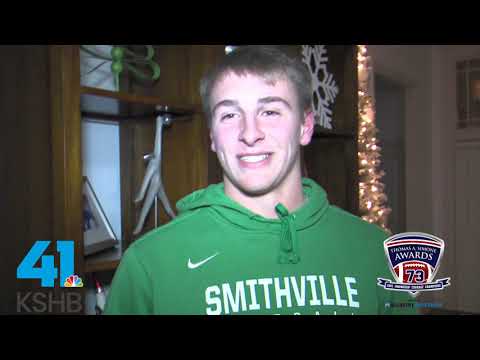 Smithville’s Cody Simoncic was named the winner of the Bobby Bell Award given to the best small school offensive/defensive lineman or linebacker.

The senior linebacker was announced as the winner on KSHB 41 during the 6 p.m. Newscast. The Bell Award is one of the five major awards given out by the Simone Awards presented by The McCarthy Auto Group.

"We're all sitting down on the couch and we're just sitting here waiting for it to come on anticipations going," Somincic said surrounded by family in his Smithville home Tuesday. "Just heard [my] name called and got it really excited," he finished.

As for what's next for the latest Bobby Bell Award recipient?

"Win the state title Friday," Somincic said grinning. "That's plan and then we'll see from there."

Simoncic is a leader of a defense that has led the Warriors to the Missouri Class 4 state title game Friday against Hannibal. It’s only the second state championship game appearance for Smithville and the first since 1969.

In a year where the Warriors gave up an average of seven points per game, Simoncic stood out currently with 52 solo tackles, 90 total tackles, seven tackles for loss, two sacks and four interceptions.