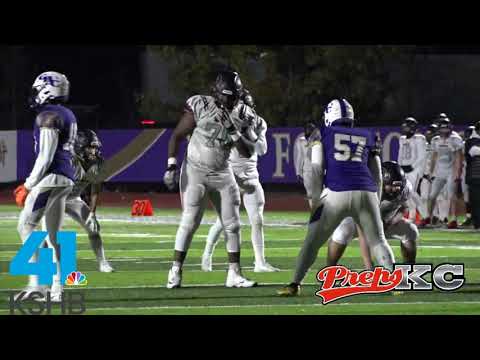 TOWN AND COUNTRY — Lee’s Summit North will have to wait another year to live the dream of playing in a state championship game.

The Broncos let a 14-point third quarter lead slip away as CBC rallied to earn a 28-21 win in the Missouri Class 6 semifinals.

Lee's Summit North (11-2) controlled play through a good majority of the first three quarters. Behind quarterback Tre Baker, the Broncos moved up and down the field at times.

"Our goal was to be as physical as possible," North coach Jamar Mozee said. "It was working. But they made some plays late that got them back in it. They just made more plays than we did down the stretch and that was the difference."

That late field goal gave North the momentum and the Broncos carried it out of the locker room to start the second half. North would score on its first two possessions of the second half first on a 14-yard Baker to Tanner Howes touchdown at the 7:01 mark of the third quarter. A Howes 38-yard run made the score 21-7 and CBC’s back was up against a wall.

With a serious look on his face, Heitert explained in the huddle that the Cadets, who had just fallen two touchdowns behind Lee's Summit North late in the third quarter of Friday's Class 6 football semifinal game, needed to score on the ensuing possession.

"I think we were aware of that," explained senior wideout Gavin Conley. "He was just trying to fire us up by telling us what we already knew."

Heitert, Conley and the rest of the offense immediately picked up the pace.

Heitert ran for three scores and threw for another to lead a gallant comeback.

Conley caught a 34-yard scoring toss from Heitert with 1:01 left in the third quarter to begin the rally.

"Right before we got the ball, I just told the guys in the huddle, 'We've got to score, we can't let it end here,' " Heitert said. "We started in the summer and we've come way too far to let it end. Got to get in the end zone."

Heitert then gave a few players some more encouragement.

"A few slaps in the head and everyone was on board," Heitert said.

The Cadets defense got a stop and Heitert immediately marched down and capped off the game-trying drive with a 1-yard run up the middle.

Another defensive stand led to the game-winning drive.

Again Heitert scored on a short run out of the shotgun formation to give his team a 28-21 lead with 6:20 left.

Pingel felt like his team was in good position to make a late charge.

"I was calm, but I was definitely concerned," he said. "We've played a lot of Kansas City teams and we knew what to expect. It just took us a while to execute the way I hoped we would."

The CBC defense stiffened during crunch time. Junior linebacker Lucas McAllister had a big sack and also turned in an important tackle for a loss in the second half.

North’s district title and semifinal appearance are both a first for the program. Mozee said he was proud of his team.

“Where we’ve come as a program and what we’re doing, it’s a true blessing,” Mozee said. “These guys have amazed me.

“It hurts really bad. We were right there. Our goal was to play in the state championship.”