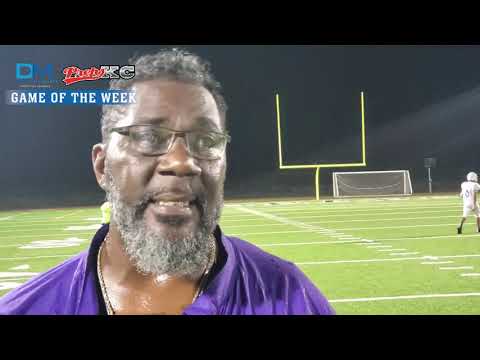 It's been more than a decade since Northeast last won a league title. Up three scores to start the second half of its Interscholastic League matchup at East, head coach Roger Franks delivered a message.

Buoyed by a three-touchdown, first-half lead, Vikings senior wide receiver Justin White opened the second half with his third TD of the game as Northeast ran away with a 28-0 shutout win.

Northeast is 2-5, and finished its league slate with two wins in two tries. The undefeated mark helped the Vikings clinch at least a share of the IL title.

“Northeast hasn't won a league title since 2008 or longer than that,” Franks said. “They had an opportunity to have a big moment and now there is something special over at Northeast.

Northeast was up two scores late in the second quarter in the Homecoming game at East when Franks challenged his team to be aware of their collective surroundings.

“You're in a fight,” he screamed from the far sideline. “You're in the jungle right now.”

The Vikings responded. Dewon Lacy intercepted his second pass of the first half to set up a 43-yard scoring pass from quarterback Andreas Rodriguez to White. The tally pushed Northeast ahead by three scores, a deficit East found too difficult to overcome.

The win clinched for Northeast at least a share of the IL title with Lincoln Prep.

Northeast only played two league games. But you play the schedule at hand, Franks said, and Northeast did, and came away as league champions as a result.

“I don't control the schedule,” Franks said. “The numbers don't lie so no matter how it lines up they have to give it to us.”

Points have come at a premium this year for East. The Bears have only scored seven points in seven games. The rebuilding process is what it is, Bears’ head coach Greg Smith said after the Homecoming loss.

Smith returned to the sideline after missing last week's game. The Bears' struggles offensively continued and its defense gave up a few huge plays in the first half. East fell to 0-6 overall on the season and 0-3 in the IL.

“It's just details,” Smith said. “We take two steps forward just to go 10 back. It seems like every big play was called back.”

The Vikings jumped out to a first quarter lead thanks to a 35-yard touchdown pass from Rodriguez to White. A 40-yard kickoff return from Nehemiah Rogers to start the game led to the score. Lacy recorded his first interception in the opening quarter.

A 13-yard touchdown pass from Rodriguez to Rogers was set up by a 30-yard catch and run by Ariath Kon, who was ruled out of bounds at the East 13-yard line. Northeast led 14-0 at the end of the first quarter.

Lacy's 44-yard interception return to the Northeast 49 set up a 43-yard scoring pass from Rodriguez to White. The pick was the second of the night for Lacy, but the strike put the Vikings up 21-0 with less than one minute remaining in the second quarter.

Rodriguez tossed four TDs on the night and snagged a pick in the fourth quarter to secure the shutout.

Northeast was in control when Lacy took a short pass from Rodriguez and scooted 78 yards for an apparent score late in the second quarter. The play was negated due to a holding call. The Vikings are short on numbers and firepower. They simply couldn't afford to have points wiped off the board.

Fortunately for Northeast, the early scores held up and Franks was on the receiving end of a long overdue water bath.

“He probably hasn't gotten one of those in a long time,” White said. “But he got one today.”