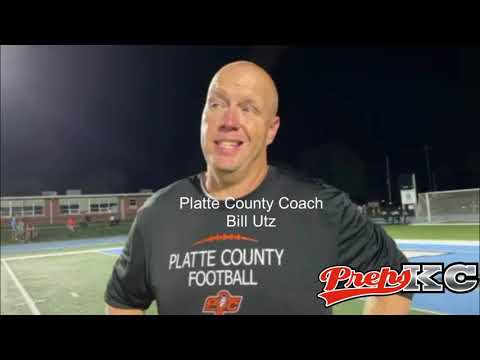 It’s the way they, Grandview, like to play the Pirates — or any team for that matter. But it was Platte County (2-1), who proved to be the more physical team en route to a 24-7 win on the road.

“It was a little bit ugly at times,” Utz said. “But overall, we’re going to take it (the win) and be happy.”

Both defenses had the upper hand in the first quarter. Grandview’s Tyrek Cleaves intercepted Jared Parsons on the first drive of the game, giving the Bulldogs good field position. Field position they weren’t able to capitalize on as the Pirates forced a crucial three-and-out.

After forcing yet another Grandview three-and-out, it was Platte County who caught the first break of the game late in the first quarter as Carter Salzman returned a Cyle Wright punt 66 yards to the Grandview 15-yard line.

After running the ball five straight times to start the drive, Utz called Salzman’s number on fourth-and-goal and Salzman delivered as he hauled in the 4-yard pass from Parsons to give Platte County an early 7-0 advantage.

“It was huge,” Utz said of Salzman’s big special teams play. “It finally gave someone momentum. It was back and forth, kind of the same thing on all the series. Honestly, you can say that was a huge turning point in the game.”

Salzman’s big night continued on the ensuing Pirates’ possession as he set up the second scoring drive of the game with a huge 44-yard reception. The 5-play, 54-yard drive was capped off by Nate Walls who lunged his way into the end zone with a 1-yard run to give Platte County 14-0 midway through the second quarter.

The Pirates added to their lead as time expired in the first half as Cole Rhoden drilled a 36-yard field goal pushing their lead to 17-0.

Grandview was able to get on the board near the end of the third quarter thanks to another Cleaves interception, which he returned 46-yards for the touchdown, cutting the lead to 17-7, however it wouldn’t be enough.

Platte County put the game away on its next series as Parsons found Tristan Magnuson on fourth-and-11 to extend the Pirates lead to 24-7.

Utz said going for it on fourth down deep inside Grandview territory was an easy decision because he trusted his defense to make the plays necessary to get off the field.

“I felt very comfortable with our defense,” he said. “We knew if we gave them (Grandview) a long field … that’s what we were trying to accomplish. If it didn’t work out the way we wanted, we would be in a good spot.”

Platte County is back in action next Friday when they host District rival North Kansas City, while Grandview will host Winnetonka.