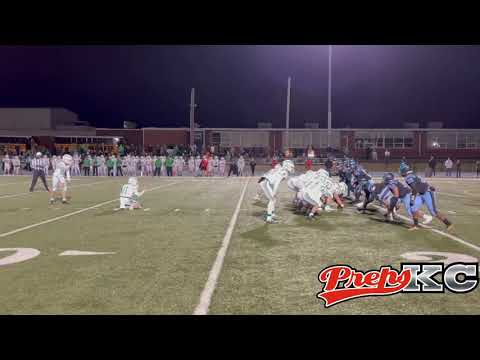 The first half of the Smithville-Grandview Class 4 state quarterfinal game was one of missed opportunities for the Warriors. The offense got inside the Bulldog 20-yard line on all five possessions, but only went into the locker room with a 10-0 lead.

The defense decided to pick up the offense in the second half.

In the first 6 minutes of the third quarter, the Smithville defense recovered three fumbles and picked off a pass. Two of those turnovers went for touchdowns, while a third led to a short field that the offense converted into a score.

“In the second half they made mistakes and we took advantage,” Smithville head coach Jason Ambroson said. “Luckily, we’ve got some heady kids who are coachable, and they make adjustments during the game. We made a couple of plays and got the juices going. The defense was lights out.”

The Smithville defense has been strong all season, but they’ve picked it up during the playoffs having yet to allow a single point in three postseason victories.

“The big thing has been our communication,” sophomore defensive end Dawson Strickland said. “We’re all on the same page.”

The first play of the second half foretold disaster for the Bulldogs. Starting the drive from their own 11, a bad snap bounced away from quarterback Chris Connor and Smithville’s Ezekiel Waisner recovered at the Bulldog 2-yard line.

On the very next play, Hayden Sigg ran into the end zone from 2 yards out for a 17-0 lead.

Strickland would make one of the plays of the game on the next drive. After a pair of Grandview first downs, Connor threw a pass that appeared to fall incomplete along the sideline. Strickland was tied up with a lineman but broke off when the pass was thrown to try and help make a potential tackle. The ball fell to the ground, but the whistle never blew, as the referee had ruled the pass went backward and was a fumble.

Strickland ran over, scooped up the ball and ran 43 yards for a touchdown and a 24-0 lead.

Like Ambroson had said, this was a prime example of a defender making a heady play.

“It’s fitting for him (Strickland), because he does so much right,” Ambroson said.

Three plays later Gabe Talley got in on the action, intercepting a Connor pass and returning it for a touchdown to make it 31-0.

The stellar performance by the defense shouldn’t come as much of a surprise. They’ve only allowed more than 12 points on two occasions all season, and those games were against two of the best teams in Class 5, Grain Valley and Platte County.

And this is coming from a unit that is still young and improving.

“We started the season with six or seven sophomores on defense,” Ambroson said. “As they’ve gotten more experience, they’ve been able to feel more comfortable. I keep telling them they’ve grown up a lot this season.”

The loss ended an impressive postseason run for the Bulldogs that had been spearheaded by its defense. They finished 6-6 after a 1-3 start to the season.

Up next for Smithville is undefeated and top-ranked Jefferson City Helias. The Warriors advanced this far in the postseason back in 2018 before falling to MICDS. They’ll need another strong defensive effort to advance to the state championship game.

“Whoever we play, they have to come to Smithville, “Ambroson said. “Our guys love playing at home. We’re excited about the next challenge.”