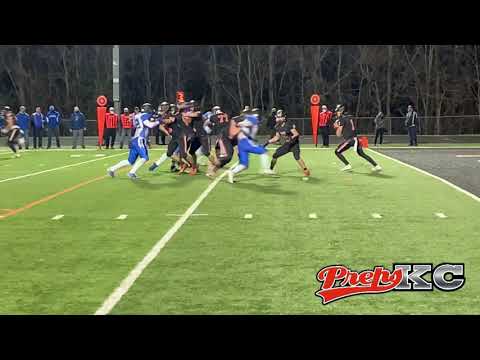 Platte County overcame a 14-point deficit, at halftime, to win a thrilling game over Grain Valley 31-28. Cole Rhoden nailed a 43-yard field goal in the 4th quarter to provide the margin of victory.

Platte County got off to a fast start taking the opening kickoff and marching right down the field, with the payoff being a 19-yard strike from Christopher Ruhnke to Dayton Mitchell. The Pirates defense forced a fumble and Ruhnke capped that drive with a perfect fade in the corner of the end zone. Joey Schultz out jumped the defender for a spectacular scoring play. Rhoden’s kick gave the Pirates a 14-point lead.

Grain Valley stormed back with quarterback Cole Keller piloting his offense. Keller threw a long pass down the sideline to Logan Pratt for a 55-yard score. Then Keller facing a 3rd and 7, avoided the rush, slipped past the defenders and raced down the sideline for a 52-yard touchdown run. Austin Schmitt converted the kick, and the score was tied.

Keller connected with Pratt again for a 24 yard score, and the Eagles grabbed the lead. After Rhoden missed a field goal with 29 seconds left in the half, Keller handed off for a 5 yard gain. Keller immediately called for his team to get back on the line, and on the last play of the half, Keller hooked up with Pratt a third time for a 75-touchdown pass. Schmitt’s kick, had the Eagles, up by 14 at the half.

The Pirates forced a punt, and it was Ruhnke’s turn show his leadership. On his first drive of the second half Ruhnke found Carter Salzman in the flat and Salzman dove for the corner of the end zone, for a 15-yard score.

On the next drive, Eagles head coach, David Allie, called for a fake punt, that was incomplete, turning the ball back over to the Pirates. After converting their own 4th down play Ruhnke, found Colby Rollins for a 40-yard touchdown, and after Rhoden’s kick the game was tied.

There were two big special teams plays that the Pirates made in the 4th quarter. The first was a Ruhnke punt that was downed on the Eagles 3-yard line. After the Pirates forced a three and out, their own offense had good field position. When the drive stalled Pirate coach Bill Utz sent Rhoden out for the 43-yard field goal and navigating a strong cross wind Rhoden nailed the kick.

After the game, Utz smiled, when talking about his kicker, “He’s got some confidence.”

Grain Valley did have three more offensive possessions. They ended in a fumble, an interception, and failed lateral play to end the game.

Utz spoke highly of Grain Valley after the game, “Grain Valley, is good football team. Their quarterback is a hell of runner, but he is a darn good passer, too.”

Grain Valley finishes their season with a record of 9-2. Platte County will face the 12-1 Webb City Cardinals next week, in the Class 5 semi-finals.