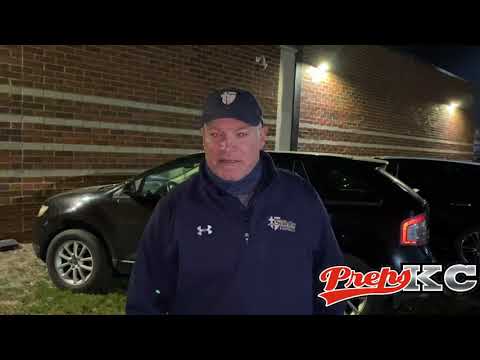 The phrase “survive and advance” has become very cliché over the years when it comes to postseason play, but that was all that mattered to St. Thomas Aquinas in its Class 5A sectionals matchup against Blue Valley Southwest on Friday night.

The Saints had plenty to celebrate in their 32-7 win over the Timberwolves, including seven sacks and 476 rushing yards. While those statistics pleased Aquinas coach Randy Dreiling, turning the ball over six times didn’t set well with him.

“We were putting the ball on the ground and had one pick,” Dreiling said. “It was an ugly win, but at this point, you just try to win and play the next week and hopefully we can get better.”

The Saints’ flexbone was firing on all cylinders in the first quarter to fuel Aquinas to a 13-0 lead. Tank Young scored the first of his three touchdowns on a 64-yard run, while Sean Carroll added a score from 6 yards out with 10 seconds left in the first quarter. Young only needed 13 carries to rack up 220 yards and Carroll had a big night of his own with 188 yards on 23 totes.

“To have him taking most of the hits and not me and him being able to run and get yards helps me a lot,” Young said. “It opens space up for me and the whole team.”

The Timberwolves didn’t waste much time in answering Carroll’s touchdown run to cut the deficit to 13-7. Tanner Curry connected with Tristen Everard for a 49-yard touchdown pass over the middle to account for the Timberwolves’ lone score. Everard highlighted BVSW’s offense with nine catches for 121 yards and the touchdown. Zach Atkins wasn’t too far behind with eight receptions for 75 yards.

Curry and company were able to effectively move the ball for much of the game, but they saw drive after drive stall following Aquinas sacks that put the Timberwolves well behind the chains. Sa’o Siavi’i had three sacks in the second quarter alone. Caden Reeves, Jalen Marshall and Cameron Penny joined Siavi’i on the defensive line to wreak havoc in the backfield throughout the contest.

“I thought we played really well. I think we almost had 10 sacks as a whole,” Marshall said of the defensive line’s performance. “I think everyone did really good and we shut down their offense.”

As the STA defensive line continued to ramp up the pressure, Young built on the momentum for the Saints by taking his second score 31 yards to the house to give Aquinas a 19-7 edge early in the second quarter. The rest of the half featured two Aquinas fumbles on offense and another miscue on a mishandled punt that gave the Timberwolves the ball at the STA 15-yard line. Southwest couldn’t capitalize, though, and the Saints took a 19-7 lead into the half.

The third quarter was much of the same. Young broke free for a 52-yard touchdown run to push him over 200 yards less than two minutes into the second half. However, the Saints coughed the ball up two more times in the third to allow the Timberwolves to hang around.

“A lot of it was just pitching off the wrong guy and things like that trying to force something,” Dreiling said. “It wasn’t really fumbling the ball. It was pitching and stuff like that.”

The Aquinas defense still answered the call each time after the Saints turned it over. Carroll did much of the heavy lifting in the fourth with two runs of 25-plus yards and Xavier Horn put the icing on the cake with a 17-yard touchdown run.

Next up for the Saints is a very familiar foe in Mill Valley. The Jaguars edged De Soto, 16-13, in the other 5A sectional matchup. The Saints will try to avenge a 34-31 overtime loss to the Jaguars from the 2019 sub-state championship and clinch a spot in the 5A title game for the second time in three years.

“That’s who we expected to play,” Dreiling said. “It sounds like De Soto did a great job on them tonight, so hopefully we can learn something from that film and incorporate it.”