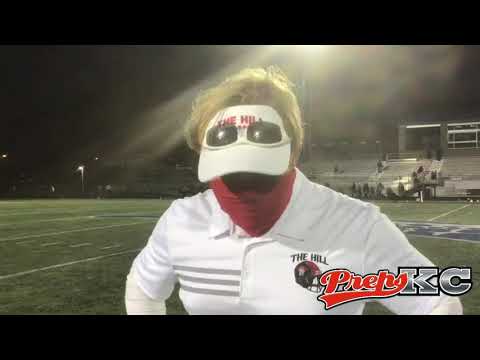 Blue Springs South and Park Hill came into Friday’s game at South looking to do something they haven’t done all season — win a football game.

Both the Trojans and Jaguars haven’t had any breaks on their respective schedules to open the season and Friday’s defensive slugfest proved to be no different as Park Hill walked away with a 21-17 win thanks to stout defense that shut out an improving Blue Springs South offense in the second half.

“We didn’t start the way we wanted to,” Park Hill coach Josh Hood said. “We’ve got to find a way to stop that from happening.”

To Hood’s point, it was the Jaguars who looked poised for a big night early.

After both teams punted on their opening drives to open the game, the Blue Springs South offense was able to find its rhythm and found the end zone after an Isaiah Frost punt return set up South with good field possession.

Four plays into the drive, Blue Springs South coach Matt Klein rewarded Frost by dialing up his number as Luke Fellers floated a 15-yard pass into the end zone giving the Jaguars an early 7-0 lead.

On Park Hill’s ensuing possession, it was the Jaguars’ defense who came up big.

Facing a 1st-and-15 at its own 24-yard line, Park Hill quarterback Anthony Hall made a mistake and was intercepted by South’s Rex Reiger, who undercut the route and made a play on the ball to give South prime field position.

Three plays later, the Jaguars found paydirt as Fellers threw his second touchdown of the night to Jaydan Steele from 3-yards to extend South’s lead to 14-0.

Park Hill — who has faced a ton of adversity this season — found and clawed its way back into the game as Hall threw touchdown passes of 56 and 8-yards to pull the Trojans even just before the half.

South threatened to score a late touchdown just before half, but the Trojans defense held the Jaguars out of the end zone, forcing South to settle for a 22-yard field goal as time expired.

“The staff did a great job,” Hood said. “We went in there (late in the second quarter) and made some adjustments to slow down their (South’s) rush game. … Coach Klein does a great job over there.”

Park Hill took its first lead of the game midway through the third quarter as Darrien Jones capped off a 14-play, 67 yard drive with a 6-yard run up the gut.

In order to ensure the Trojans their first win of the season, the defense needed to step up and make a play.

South’s Steele scored what appeared to be the go-ahead touchdown with 3:34 left in the game, however an illegal block in the back nullified the touchdown, a play later, Steele fumbled on fourth down — after picking up the necessary yardage to convert the first down.

“At the end of every single game we’re missing out on something,” Klein said. “We’re fine. I think it’s just getting over that hump. … to be right there at the end and step up in a big moment when the game is on the line … we’re obviously close. We’ve just got to keep working toward that.”