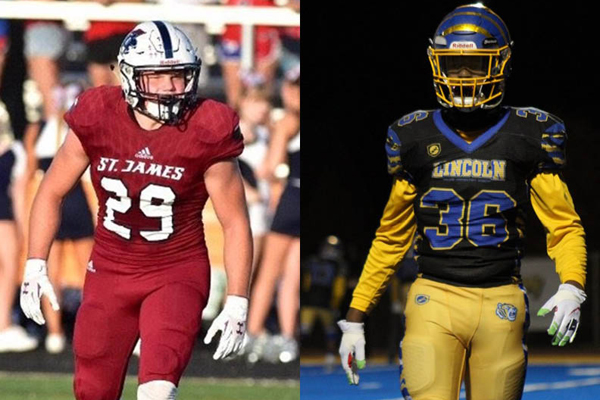 Each year at the BeYOUnion.com Kansas vs. Missouri All-Star Game the Greater Kansas City Football Coaches Association honors the top linebackers in the Metro.

This marks the 27th year of the annual GKCFCA Ronald Warren Outstanding Linebacker Award. The Greater Kansas City Football Coaches Association started this award in memory of the star linebacker from Southeast High School who was tragically killed in the spring of 1993.

The award recognizes the linebacker in the greater Kansas City area who best exemplifies the special qualities and overall spirit of Ronald Warren. He was an outstanding player who put fear in the eyes of opposing coaches. But even more important than his on-field abilities were his leadership qualities and citizenship off the field.

This year’s Kansas winner is Cade Lautt of St. James Academy. Lautt finished his senior season with 75 solo and 116 total tackles and nine tackles for loss in just nine games.

This year’s Missouri winner is Jermaine Hamilton-Jordan of Lincoln College Prep. The junior had 149 total tackles 18 tackles for loss and 9 sacks helping the Blue Tigers to a 12-1 record.