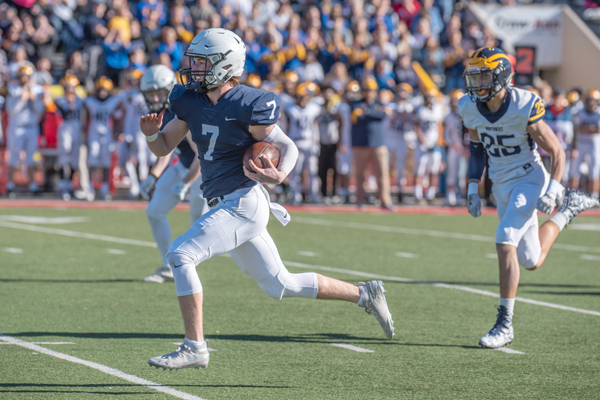 Cooper Marsh was in middle school when Mill Valley won back-to-back state championships in Pittsburg in 2015 and 2016.

"I was in the stands cheering them on," said the Mill Valley junior quarterback. "I was like I want to be like that one day. To be able to call myself a state champion is just amazing."

Marsh rushed for a team-high 183 yards and four touchdowns, leading Mill Valley to a 41-31 victory over number-one ranked Wichita Northwest in the Kansas Class 5A state championship game. It's the Jaguars' third state title in the last five years.

"We've been working since the end of last season for today," said Marsh, who also passed for 107 yards. "To pull out the win and to be a state champion is just amazing."

"It's unbelievable. It's so awesome. I can't begin to put words to it," said Tyler Green. The senior running back ran for 131 yards and a touchdown for the Jags.

Mill Valley opened the fourth quarter with a 24-yard touchdown run by Marsh, giving the Jaguars a 31-17 lead. Two minutes later, Wichita Northwest quarterback Reagan Jones took off from midfield and raced 50 yards untouched to cut the lead to 31-24. The Jaguars muffed the kickoff, and the Grizzlies recovered the fumble at the Mill Valley 20. Two plays later, Reagan Jones connected with Zion Jones on a 19-yard touchdown pass, and the game was suddenly tied at 31-31 with 9:02 remaining.

After the teams traded punts, the Jaguars took over deep in their own territory at the seven yard line with 7:01 left. Green took a hand-off around the right end and found daylight along the far sideline for a 60-yard gain to the Wichita Northwest 33.

"He needed that. He had a couple of 20-yarders here and there, but I knew there was going to be a big 60-yarder somewhere in the game, and it came at the perfect time," said Marsh.

Three plays later, Marsh faked a hand-off to Green and ran 28 yards for the go-ahead touchdown.

"We were focused on what we needed to do to get a nice drive there and score," said Mill Valley Head Coach Joel Applebee. "Our kids did an unbelievable job of executing each play. Tyler, I can't say enough about him. What an unbelievable kid. He deserves everything he's getting right now. He's unreal."

Wichita Northwest took over possession, and on fourth-and-four at the 47-yard line with 3:32 to go, Reagan Jones' pass attempt was knocked out of the air by Mill Valley's Kendal Christopher. The Jags advanced the ball to the Grizzlies' 16 yard line, where Christopher Tennant sealed the victory with a 33-yard field goal with :29 seconds left on the clock.

"It was a whole team effort. Special teams with the field goal to seal it at the end," said Applebee. "I'm just so proud of our kids all the way around. We needed to do it offensively and defensively. They responded in different situations. Couldn't be more proud of them."

"They're amazing," Green said of the offensive line. "We always say it starts up front, and that's how it was tonight. They made amazing holes for me and Coop."

"I had a little idea that I was going to run the ball, but I didn't know that the holes were going to be that big," said Marsh.

"Coop had an amazing day today. He went out here and did his job. We did our job, and it just showed out tonight," said Green.

Defensively, Mill Valley held the high-scoring Grizzlies to 31 points, well below their season average of 53 points per game.

Wichita Northwest started the game with the ball. Reagan Jones ran up the middle untouched for a 38-yard touchdown run and a 7-0 lead. Marsh answered with a 52-yard keeper to tie it up at 7-7.

"After the 52-yarder, I was like yeah, it's going to be a good running day," said Marsh.

"Cooper did a great job of reading those plays. Obviously we opened up some big lanes for him to run through, and he did an outstanding job today," said Applebee.

Justin Sanders recovered a fumble for Mill Valley, setting up the Jags at the Grizzlies' 19-yard line. Marsh carried it around the left end and took it in for his second touchdown and a 14-7 Mill Valley lead. The Jags went ahead 21-7 in the second quarter on a one-yard plunge by Green. A three-yard run by Northwest's Jamar Martin cut the lead to 21-14. A 33-yard field goal by Northwest's Carson Arndt made it 21-17 at halftime.