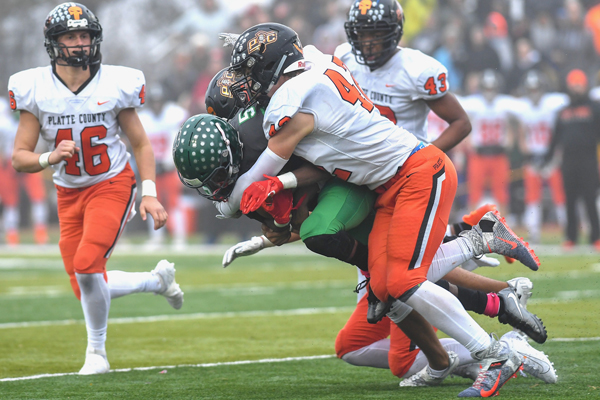 ST. LOUIS — For one of the few times during Saturday’s Class 4 semifinal, St. Mary’s senior quarterback Cam’Ron McCoy stepped up into a clean pocket.

McCoy’s pass drifted deep down field toward wide receiver Kevin Coleman, and at the last moment, Platte County junior Dayton Mitchell reached in and knocked the ball away. The desperation throw on fourth and 17 fell incomplete, and the Pirates were able to kneel out the final 1 minute, 4 seconds of a tight 15-14 victory at Kresko-Miller Field.

Mitchell played wide receiver and cornerback for a second straight week and came up big time and time again. He finished with both of Platte County’s touchdowns, a recovered fumble and the key pass breakup to send the Pirates to the Show-Me Bowl in Class 4 for the first time in program history and for the first time since winning the third of three straight Class 3A/3 titles from 2000-2002.

“I was just hoping there wasn’t a flag,” said Mitchell, who finished with team-highs of six catches and 125 yards. “If (playing me both ways) is what we need to do to win, I’m all for it.”

Platte County (11-3) has won five straight since suffering an upset loss to Grandview in the regular season finale. The Pirates advance to play dynastic Webb City (13-1) in next week’s Class 4 state championship game scheduled for 7 p.m. at Faurot Field in Columbia, Mo. The Cardinals have been the classification’s gold standard for years and were winners over the Pirates in a 2017 state semifinal.

“This means a tremendous amount. This program obviously has an unbelievably rich tradition,” said Platte County coach Bill Utz, who takes the Pirates to the state title game for the first time in his tenure. “Webb City is obviously a team that if you look back on the history of Class 4 — I’m not sure exactly how many years it goes back — but either Webb City wins it or the team that beats them wins it. It’s going to work out that way again.”

Platte County’s offense committed a pair of costly turnovers, missed three first half field goals and botched an extra point to provide an opening. However, the Pirates immediately responded after falling behind and drove into the red zone before settling for a 26-yard field goal from senior Grant Allen to give them the lead for good.

Outside of the two touchdown drives, Platte County regularly pressured McCoy and limited a previously explosive offense to just 253 yards of offense.

“They were so explosive and able to move it and score at any time,” Utz said. “Controlling the clock was so important. The quarterback was making some good throws under a lot of pressure. We knew we had to get pressure on him and make him move around a bit and he still made some good throws.”

St. Mary’s held possession three times with a chance to take the lead. The first drive ended with a three-and-out and the second included a stop from Platte County senior defensive lineman Garret Watson for a 9-yard loss on an attempted wide receiver pass and a sack from junior Forrest Boynton to force another quick punt.

Platte County then held possession for more than 6 minutes before punting the ball away with 2:25 to go in regulation. St. Mary’s gained a pair of first downs before Watson recorded a sack for a 7-yard loss. The Dragons spiked the ball on second down to avoid using their final timeout, and Pirates sophomore linebacker Trevor Scott broke up and nearly intercepted the third down pass.

On the final play, Mitchell found himself one-on-one with Coleman, who had the 35-yard catch and run touchdown to give St. Mary’s the 14-12 lead. The pass breakup set off a celebration on the Platte County sideline.

“I saw him throw the ball. I turn and see Dayton running up from behind,” said Watson, who recorded 1½ sacks and two tackles for loss.. “I see him jump up in the air and swat it to the ground, and it’s just joy running through your body. It’s a great feeling.”

St. Mary’s had the first big break in the game with a sack and forced fumble to take possession at Platte County’s 30. The Pirates held and Watson and senior linebacker Gabe Harmon combined on a fourth down sack.

Two plays later, Platte County junior quarterback Chris Ruhnke found Mitchell on an out route in the left flat, and he broke an initial tackle before racing 71 yards for a touchdown. The extra point failed after a botched snap, but the Pirates led 6-0.

St. Mary’s had myriad of drive-killing penalties in the first half, and Platte County eventually took a 12-0 lead when Ruhnke, who finished 14 of 26 for 206 yards, lofted a wobbly pass down the middle of the field that Mitchell hauled in for a 27-yard touchdown, and after a failed two-point conversion, the Pirates led 12-0 with 6:02 left before halftime.

“It wasn’t really the route I was supposed to run, but I kind of gave Chris a look and he saw me,” Mitchell said.

St. Mary’s responded with a touchdown drive to cut the lead to 12-7 before halftime.

Platte County nearly added points late in the second half, but Ruhnke and Mitchell just missed on their third touchdown and Allen missed a 47-yard field goal on the final play of the half. The Pirates took the opening kickoff of the third quarter and marched into the red zone on big chunk play from junior running back Cayden Davis (29 carries, 137 yards) before he lost a fumble at the 16.

St. Mary’s scored again but didn’t have enough offense to finish the upset.

“Whenever it’s this type of atmosphere — I say it a lot — it’s all about physicality,” Watson said. “We had a couple of drives where we had some mental mistakes, but we got our heads back on and kept playing physical with great effort. Physicality and effort wins football games.”

Platte County played in the state semifinals for the second time in three years and seventh time in program history. The Pirates will be seeking their fourth state championship but first in nearly two decades.