Rising to the top 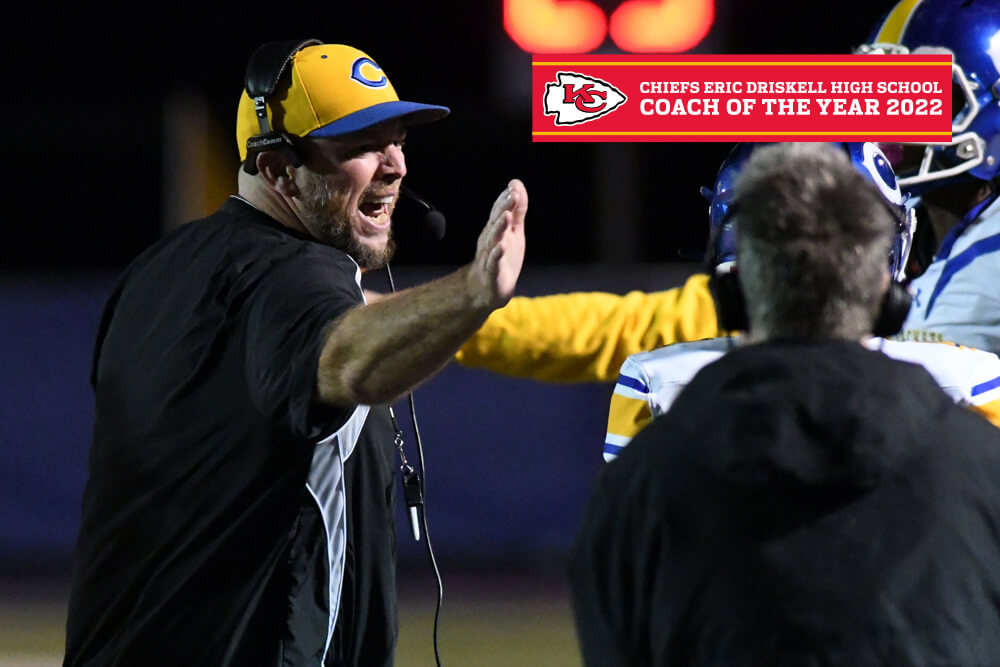 DeLong was recognized with finalists Olathe Northwest head coach Lorne Clark, Gardner Edgerton head coach Jesse Owen and Blue Springs South head coach Alan Wilmes. DeLong was named the Chiefs Coach of the Week for Week Seven, which qualified him for the honor. The Eric Driskell Coach of the Year Award is selected by a panel comprised of the Missouri and Kansas Boards from the Greater Kansas City Football Coaches Association. As a result of this honor Central High School will receive a grant from the Hunt Family Foundation.

Center finished the season 11-1, losing to defending Class 4 champion Smithville in the quarterfinals. The Yellowjackets went 6-0 in league play, and DeLong led the team to its first Missouri River Valley Conference title in 2022 since joining the league four years ago. DeLong said it was humbling to be chosen amongst these coaches.

“It’s pretty special, especially with the group of coaches and what they’ve done with their programs and the success they’ve had and just the level of coaching we have in the Kansas City Metro” DeLong said. “I’m very humbled. This is a credit to Center, the kids here and our assistant coaches. It also touches me that this is the Eric Driskell award. I had a chance to spend time personally and professionally with Coach Driskell and what a special man and to be honored in his name - I’m very humbled by that. To even have my name echoed with Eric Driskell and what he did at Blue Valley High and what he did for kids. He gave everything he had for this game of ours and that is very special to me.”

DeLong finished his 14th season as the head coach at Center where he has amassed a 111-44 record, four district titles and four trips to the quarterfinals. The Russell High School graduate played at Dodge City Community College and Fort Hays State before beginning his coaching career as a middle school football coach. He would go on to be a lead assistant at Blue Valley North and Shawnee Mission North before being hired to his current role as head football coach for Center in 2009.

The announcement marks the finale of the 26th season of the 2022 High School Coach of the Week, a joint initiative of the Kansas City Chiefs and the National Football League. This program is designed to recognize and reward Kansas City area high school coaches for superior performance on a weekly basis while honoring individuals who are shaping today’s youth and tomorrow’s leaders.