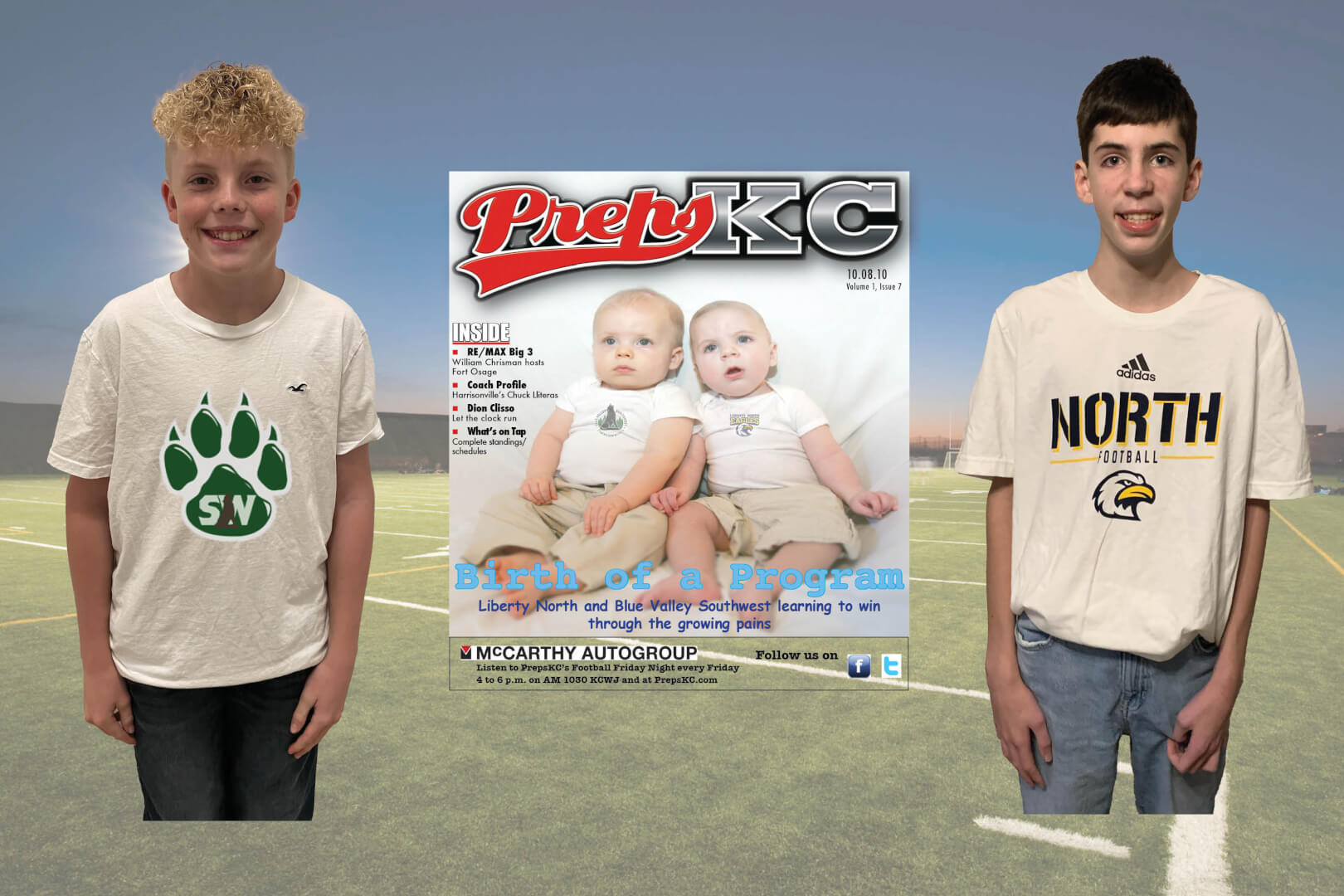 Editors Note: This is a reprint of articles that ran in Oct. of 2010. It was the first year of PrepsKC and the seventh edition of our magazine featured a look at the two newest programs in town. They were the last two new programs from large school districts to open until Olathe West opened in 2017. The boys in the original photo were also in their first year of existence and now both are in 7th grade.

As Blue Valley Southwest was going through the paces on a hot July morning there were construction workers putting in fence around the field. The young Timberwolves went through their paces as Bobcats were landscaping and the finishing touches were being put on the Southwest athletic complex.

The Timberwolves just went to work not paying attention to the work around them. They were busy putting in the work necessary to start a first year program.

Just like the complex around them on that summer day, the Timberwolves were a work in progress. Even now, five weeks into the season Southwest is still a team filled largely with sophomores that is just trying to figure out what kind of football team they are going to be. Oh, and they are trying to win games in one of the toughest leagues in Kansas, the Eastern Kansas League.

There’s been a lot of learning and some ugly losses but the Timberwolves have kept a positive attitude. Veteran coach Bill Lowe came over from Emporia to start this program and said it has been a great experience to come home to the Blue Valley district where he graduated from high school in 1973.

“The biggest thrill has been being able to come home and start a program from Blue Valley where I grew up,” Lowe said. “Our high school is about a mile and half from the old farm house where I grew up.”

Southwest opened this year with students from both Blue Valley and Blue Valley Southwest. Most times when new schools open it is simply students who all attended one school broken off into the brand new school. This opening was a little different as former rivals were brought together into the new school.

That combination could be tough for regular students. For athletic teams the melding of two different programs that might have two different philosophies could provide for a lot of confusion. Just learning to be teammates when maybe the players have never even practiced together is even tougher.

“That’s been exciting to come home and see the kids start to come together and start to feel like it is Southwest,” Lowe said. “It’s still not real yet. We’re just trying to figure out who we are and what we are all about. They’re learning and they are getting there.”

Another difficulty is the numbers game. Blue Valley Southwest enters as a class 4A school and with only a few seniors it instantly became the smallest school in the EKL. Playing in the EKL meant a schedule that featured state powers Bishop Miege, Blue Valley and Gardner-Edgerton in three of the first four games of the year.

“We’ve seen them grow up fast,” Lowe said. “They had to. We started out with Bishop Miege, then Blue Valley and then Gardner. That’s a pretty tough go for a new high school. We only have 30 kids healthy that can play varsity. That’s a tough challenge just to get them to be hard nosed and play tough. I’ve really been proud of them the way they have grown up.”

“Last week we played Gardner tough and for a while and the kids wore down. They are bigger, faster and stronger. It’s 18-year olds playing against 15-year olds.”

The Timberwolves grew up in a hurry last week against Blue Valley West. In a game that could end up being a major rivalry down the line Southwest hung with the Jaguars for most of the first half only to find themselves down 35-14 after the second-half kickoff. The Timberwolves would score twice in the second half and then drove down for the tying touchdown in the game’s final minutes. Southwest would get the tying touchdown and go for a two-point conversion that would end up winning the game.

The gutsy call by Lowe and his staff gave the Timberwolves the first win in school history and it happened to come at the expense of West. After the game Lowe had a hard time deciding if the win was for real.

“I don’t know if it’s real,” Lowe said. “I can’t remember back to the first half. I remember going for two but everything else is tough.

“What a tough group of kids. There were so many great plays tonight it is tough to keep track.”

That win might just be the one everyone remembers in a few years. The Timberwolves are playing in Class 4A right now and depending on the economy and housing growth in the district the Southwest might be there a few years. The season that started with four straight losses could include a trip to the playoffs if the Timberwolves can find a way to get through a district that includes Bishop Ward, St. James Academy and DeSoto.

“With economy nobody knows for sure right now,” Lowe said about the growth. “In football we know we will be in 4A for two years. After that there is no telling. It just depends on the economy, who builds houses and who gets in our area.” 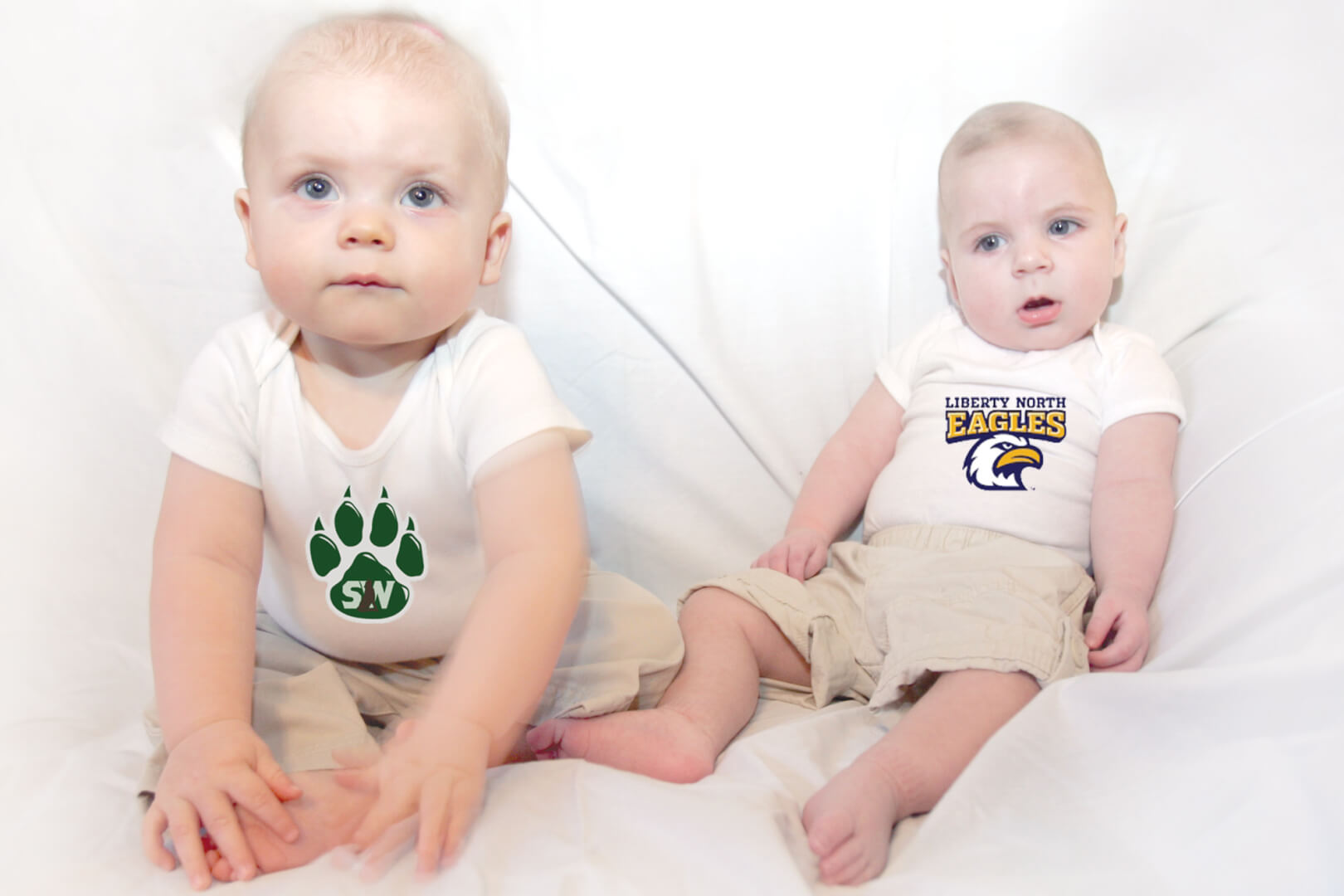 Liberty is a close-knit community on the north side of the metro, long known for strong support of any and all student activities, but particularly athletics. The town has a collective passion for the varsity sports teams and as a result many students choose to participate.

When a second high school was scheduled to open in the fall of 2010, that community involvement was a major factor in Ken Clemens deciding to become the first football coach in Liberty North history.

“I live in Liberty,” Clemens said. “I know how strong the community is in Liberty and how involved and active the families are and the kids are. I know the potential for long-term success is here based on the community.”

The players sense the support as well, both from their fellow students and the community as a whole.

“The entire school is behind us every week,” said junior quarterback Austin Haywood, described by Clemens as one of the main team leaders for his young squad. “Even at away games we have a lot of fans there. It’s awesome the intensity and excitement around the school before every game.”

Of course, building a brand new high school football program from scratch is a daunting task for a head coach and the vast scope of the work apparently cannot be fully understood without living it.

“Pretty much every day you come to work is a new thing that you didn’t foresee that is a new challenge,” said Clemens. “I was warned about that when I took the job by (Staley coach) Fred Bouchard that there’s so many things that you just don’t anticipate that you have to have a plan for. All the little things that make traditions within a football program, sometimes we’ve just got to make them up on the fly.”

Being the first head coach in a school’s history has its rewards, too. The Eagles have no seniors so Clemens has had a front row seat for some significant transformations.

“I’ve had the opportunity to watch these kids grow and change,” Clemens said. “It’s amazing how much just physically they grow from January to September when they’re as young as they are. You don’t really notice it when you’re at a 4-year school.”

Brand new schools almost always struggle on the field, chiefly due to the lack of seniors.  However, the Eagles were able to get the school’s first win in just the second game of the season and have since picked up win number two.

“You would like to define success in a 100 different ways,” Clemens said, “but ultimately everybody knows that winning is the ultimate measure of success. The fact that we’ve won a couple is a good motivator for the kids to see that their work is being rewarded.”

The Eagles stand at 2-4 on the season and Clemens likes what he sees from his team, despite their inexperience.

“We have a solid group of kids that are willing to work and they show up every day,” Clemens said. “They execute. You can do pretty much anything you want with them in terms of scheme.”

“I think the downfall to their age,” Clemens continued, “is not having that example of the passion for the game and that Friday night intensity. It’s getting better each week. But when we started the season our Friday night intensity was about the same as our Thursday afternoon practices are. Each week it’s starting to click a little bit more that on Friday night it’s a whole different level.”

Leadership, though, is something Clemens feels his squad has in abundance.

“We have a lot of young men who are natural leaders,” he said. “So just from the perspective of modeling good behavior and good work ethic, we’re loaded with that. You don’t realize what a difference having seniors makes. Each week we get a little bit better in terms of just providing an example of what going hard is.”

With a new football program starting without seniors, fans and outsiders look to year two as having the best potential for success on the field with presumably every key player returning. However, the players and coaches for the 2010 Eagles are focused on maximizing their potential in this season and all seem to believe a playoff berth is within their grasp.

“I think we have the opportunity with the way we’re improving to make the playoffs,” said Haywood.

“I would definitely like to make the playoffs this year if at all possible,” Miller said. “It would be huge to show our school is going to be something special.”

“We’re looking forward to the next (4) games and hopefully a playoff game,” Clemens said.

With 110 players, freshman through juniors, out for football in a school that only has 700 students, participation is not an issue.

“The parents are great about getting their kids involved in activities,” Clemens said. “And I expected that. Again, I credit our numbers just to the strength of the Liberty community overall.”

The smaller school also creates a different atmosphere, not only on the football team but in the hallways.

“It’s more like a family,” agreed Haywood. “Everybody knows everybody because we have such a smaller school than we had last year. Everybody gets behind the team.”