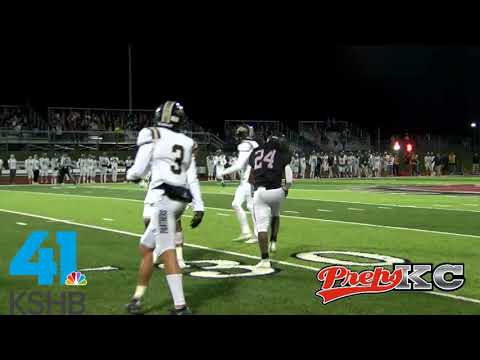 It sure would have been a frustrating end to a wonderful season for Lee’s Summit North.

Here were the Broncos, playing in front of a large crowd on their home field, struggling to find the end zone against a Raymore-Peculiar team they dominated back in September. The red zone, where the Broncos size and speed had served them well all season, had become a horror zone.

But Lee’s Summit North kept chipping away, and after a long, methodical fourth-quarter drive, the Broncos put all those frustrations aside and held on for a 21-14 victory in a Class 6 District 3 semifinal.

After getting by the defending Class 6 state champs, North (10-1) will next play host to Joplin for the first district title in school history. Coming up short of the opportunity would have been frustrating indeed.

Much like the Broncos’ inability to find paydirt for most of the game.

“We were able to hit them and move it,” North coach Jamar Mozee said. “I wished we would have got in, it would have made a little less stressful there. But kudos to (Ray-Pec). I thought they played really hard and they did a really good job.”

North moved the ball well most of the game, especially on the ground, where the Broncos picked up 258 of their 392 total yards. Running back Quincey Baker burst through big holes up the middle for 162 yards on 24 carries, and sophomore Tanner Howes added 82 yards and a touchdown on 18 carries.

But when the Broncos neared the end zone, Ray-Pec made those yards harder to find. A first-quarter drive ended on downs inside the Panthers’ 32-yard line. They also turned it over on downs on the Ray-Pec 4 in second quarter. Two deep marches in the third quarter ended in field goals.

“It was really frustrating,” North quarterback Tre Baker said. “I think both times (in the third quarter) we had two really big plays that got us down inside the five. One of them ended on the 10-yard line and one ended on the six so went negative both drives. We’ve definitely got to work on that.”

North got the first points of the game when Tre Baker threw a 14-yard touchdown pass to Zackary Coetzee for a 7-0 lead early in the second quarter.

But on the very next play from scrimmage, Ray-Pec quarterback Zander Dombrowski hooked up with wide receiver Jaidyn Doss, who sprinted down the left sideline 80 yards for a TD and a 7-7 tie. Doss finished with 121 receiving yards on five catches.

And in the closing seconds of the first half, Ray-Pec lined up for a field goal attempt, but holder Jack Ardito took the snap ran it into the end zone from 1 yard out. Suddenly Ray-Pec, which lost to North 41-14 back on Sept. 17, had a 14-7 halftime lead.

“We felt really good at halftime,” Ray-Pec coach Sean Martin said. “This was where we wanted to be and we were doing what we wanted to do.”

That set up a 16-play, 76-yard drive that ended with Howes blasting up the middle for a 7-yard touchdown run. Isaiah Mozee threw to Devin Blayney for another two points and a 21-14 lead.

“Sometimes you’ve got to be patient,” Mozee said. “We run the rock and we’re going to keep doing it. We just had to be patient, figure out what they’re doing and then we were able to move it.”

Ray-Pec wasn’t done yet, not after a Nick Karr punt pinned the Broncos to their 1-yard line and the Panthers eventually got the ball back at midfield. But when North’s DeAndre Beasley picked off a wildcat pass from Tucker Miller in the closing minutes, the Broncos could finally breathe.

And enjoy the first 10-win season in what had once been a long-struggling program. One more victory would bring yet another first.