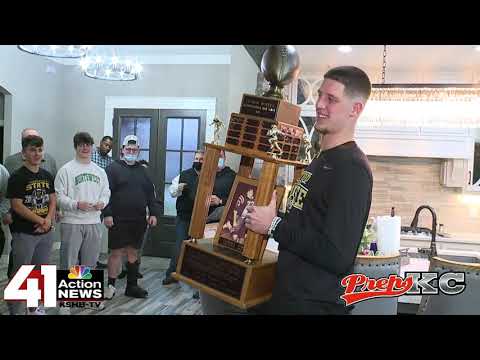 The winner of the 38th Thomas A. Simone Award as the top all-around player in the Kansas City Metro is Raymore-Peculiar quarterback Conrad Hawley.

The senior was surprised at his house with the award early today and it was formally announced on 41 Action News during the 6 p.m. Newscast.

Hawley completed a senior season that saw him lead the Panthers to the Missouri Class 6 championship with a 23-0 win over defending champion DeSmet.

In an outstanding year, Hawley threw for 2,722 yards and 25 TDs as the Panthers finished 12-2. He is the second Ray-Pec player to win the Simone Award. Chase Coffman won the honor in 2004 before starring at the University of Missouri.