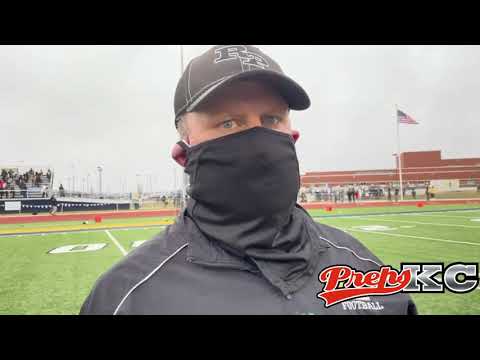 Raymore-Peculiar and Liberty North are no strangers.

Saturday’s Class 6 semifinal at Liberty North marked the third time in the last calendar year that the Panthers and Eagles have played each other and all three times the Panthers have walked away as the winner — this time the win put the Panthers in the Class 6 championship game with an impressive 24-17 win.

After the game, Ray-Pec coach Sean Martin noted just how important this win was, not only for him and his program, but for the communities of Raymore and Peculiar.

Both teams started the game scoring on fire offensively, scoring on five of the game’s first six possessions.

Liberty North, who came into the game riding a nine game win streak, opened the scoring with an impressive five-play, 50-yard drive that was capped off by running back Zac Willingham-Davis’ 21st rushing touchdown of the season with a 9-yard run to give the Eagles an early 7-0 lead.

The Panthers wasted no time responding.

Facing a third-and-8 and looking for a spark to extend the drive, Ray-Pec turned to sophomore Jaidyn Doss. Doss was able to haul in a 41-yard pass from Conrad Hawley. One play later, the Panthers found the end zone as Phillip Fager scored his first of two touchdowns with a 5-yard run up the gut.

Ray-Pec, whose defense is notorious for creating turnovers, came up big on Liberty North’s ensuing possession as Isaac Cook came away with the strip sack of Joe Kroenke, giving the Panthers great field position.

“Our defense, we’ve had times where we’ve bent, but not quite broke,” Martin said. “Give credit to Liberty North and their staff for figuring out (what we were trying to do defensively early).”

The Panthers were unable to convert the turnover into a touchdown, but instead settled for a 20-yard field goal by Trey Kudron which gave Ray-Pec a brief 10-7 lead midway through the first quarter.

Liberty North was able to shake off the fumble on its next series as it only needed two plays to reclaim the lead as Sam VanDyne found a wide open Davis Rockers streaking down the far sideline for a 58-yard touchdown to give the Eagles the 14-10 lead.

Ray-Pec took the lead for good in the second quarter as Ben Einess capped off an eight-play, 80-yard drive with a 3-yard run.

The Panthers added to their lead late in the first half as Fager scored his second touchdown of the game with a 7-yard run to give Ray-Pec a 24-14 halftime lead.

With the win, Ray-Pec will play De Smet in the Class 6 State Championship game on Nov. 28 at Jefferson City High School.

The Spartans defeated the Panthers 37-0 in the Class 6 semifinals in 2019.

“We’re excited to go and give it another shot,” Martin said. “We’re looking forward to it.”