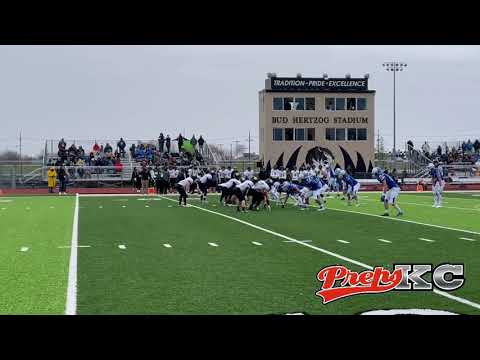 It’s amazing how quickly the momentum can flip during the course of a game. A game that appears on the brink of a down-to-the-wire finish, can turn into a blowout in no time.

That was the case Saturday afternoon during the Class 3 state quarterfinal game pitting Summit Christian Academy against Maryville.

The Spoofhounds held a 21-9 lead in the third quarter when the Eagles put together a long, 17-play drive to get down to the Maryville 10-yard line. The Eagles were on the cusp of making it a one score game and setting up an interesting fourth quarter, until all of a sudden, they weren’t.

Summit Christian’s offense stalled at the 10, a fourth-and-seven pass falling incomplete. It seemed to give the Spoofhounds a boost, as the offense responded by going 90 yards in just six plays to take a 28-9 lead before the quarter ended. They wound up coasting to a 35-9 win from there and into the state semifinals next weekend.

“They started driving and had a lot of momentum, especially with a 17-play drive,” Maryville running back and defensive back Connor Weiss said. “To get that turnover (on downs) and then drive it down the field definitely flipped the momentum and kept it on our side the rest of the game.”

Added head coach Matt Webb: “Our defensive backs played some really good coverage. They went into trips formation and our guys just executed to get off the field.”

On the opposite sideline, Eagles head coach Todd Berck knew that was a chance his team couldn’t let slip away.

“That was the drive we needed to make hay on, and we didn’t,” he said. “Momentum-wise, that was really a big momentum changer. Had we scored there it would’ve been 21-16. You have to make hay when the sun shines, literally today.”

From that point on the Spoofhounds seemed to put it in cruise control. They’ve always been a run-heavy team, so when they get a lead, especially in bad weather, they feel right at home. The offense only threw the ball one time in the second half.

“Our biggest thing is the run. Everybody knows that we’re going to run, and we’re going to continue to run the ball,” Weiss said. “That’s just Maryville Spoofhound football.”

After the Maryville defense got another stop to start the fourth quarter, the offense iced the game. On third-and-14, Caleb Kreizinger took the ball on a reverse around the sideline and knifed his way through a row of blockers for a 32-yard touchdown.

The big play on third down was a key theme in the first half, but by the way of the passing game.

Leading 7-6 in the second quarter, Maryville quarterback Connor Drake connected with Kreizinger for a 39-yard gain on third-and-eight. Three plays later, on another third down, Weiss scampered into the end zone from 14 yards out for a 13-6 lead.

After a 23-yard field goal from Summit Christian’s Jonah Pozniak made it 13-9, Drake and the passing game struck again. Facing a third-and-16, Drake threw a perfect pass down the field to Trey Houchin for a 44-yard touchdown and a 21-9 lead into the half.

“I’m very proud of Connor (Drake),” Webb said. “The first week of the season we lost our quarterback, Ben Walker. All of a sudden, he’s thrusted into the starting role on a team that has high expectations. He’s taken it with leaps and bounds and improved every week. He’s made his mistakes, but he’s made throws.

“Today showed that championship mentality. He’s our leader and the kids are behind him. For him to hit those two throws were really big.”

The field goal earlier in the quarter by the Eagles was another big stop by the Maryville defense. The Eagles drove down to the 1-yard line but were called for illegal pushing, as they tried to help quarterback Grayson Sprouse into the end zone. Berck pleaded on the sideline with the referees that the play was no longer considered a penalty this season, but to no avail, as they eventually settled for the field goal.

“In the first half I felt like we left a lot of opportunities on the table,” Berck said. “In a big game, against a good team like Maryville, you can’t do that.”

Summit Christian ended the season with an 8-4 record. Maryville (10-3) will head back home to face Cassville for a spot in another state championship game.

“That’s part of our culture and tradition,” Webb said. “These kids have grown up in it. We haven’t had a home semifinal game since 2012, my first year here. We’ll be focused, but we’re going to have a lot of fun with this.”