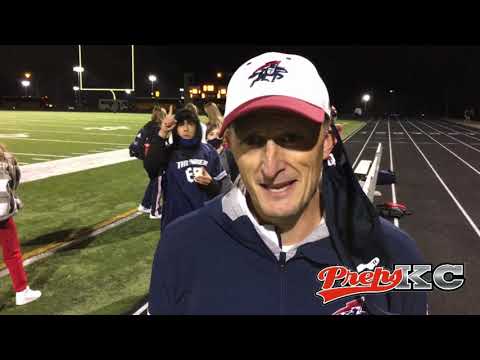 With the game tied at 29-29 and three seconds left in the fourth quarter, the Stags missed a game-winning field goal attempt as time ran out. In overtime, Bishop Miege scored first, but the extra point was blocked by La’James White of St. James Academy. The Thunder tied the game with a touchdown by White. Josh Kirby’s extra point split the uprights. St. James Academy won 36-35, setting off a thunderous celebration.

With the victory, the Thunder advance to the first state championship game in the 14-year history of the varsity football program. St. James Academy (7-4) will play Ark City (6-6) in the Class 4A state championship next Friday afternoon at 1:00 at HCC-Gowans Stadium in Hutchinson.

“It feels very, very good. Proud of this team,” said St. James Head Coach Tom Radke. “The senior class has been amazing. Our coaching staff prepared them all very well for tonight. A lot of hard work. I’m super happy for all the work these guys have gone through. And with COVID-19, it’s been super stressful. So the celebration was super sweet.”

“This was honestly the toughest fight we had all year,” said White. “We knew we could get ‘em, but we knew it would go all the way to the end.”

Four quarters wouldn’t be enough. White’s 5-yard touchdown run tied the game at 29-29 with 4:42 left in the fourth quarter. The Stags’ last possession in regulation began at their own 24. Josh Conklin converted on third-and inches with a one-yard gain to the 35. Quarterback Timothy Dorsey scrambled 18 yards to break into Thunder territory. Dorsey converted on third-and-two from the St. James’ 40 with a pass to Mack Moeller.

With under a minute left and the clock running, Jaylen Burch gained 11 yards on a run to the Thunder 6-yard line. Dorsey was sacked on first-and goal. On second down he completed a short pass to Burch. On third down, Dorsey was stopped at the 8-yard line.

The Stags’ shot at playing for seventh consecutive state championship came down to a 24-yard field goal attempt on fourth down and three seconds left. Stephen Neenan’s kick looked good from the Bishop Miege sideline. The Stags ran onto the field in celebration, but the ball sailed just outside of the left upright.

“At that point you kind of feel like you have the momentum. You feel like it’s going to go your way finally, and it did,” said Radke.

St. James Academy won the coin toss and deferred. So Bishop Miege started overtime with the ball placed on the 10-yard line. Burch ran up the middle for eight yards. On second down, Burch found the endzone. Now for the all-important extra point.

“I was saying in my head ‘I’m gonna go block it’. This is not going to be my last game,” said White. “I’m not going out without blocking this kick.

White did just that.

“We saw on film that sometimes their kicker has a little hitch in his step, and he flinched a little bit on that one,” said Radke. “Jimmy (White) came off the edge perfectly and blocked it.”

Now it was St. James’ turn from the 10-yard line. An encroachment penalty on the Stags moved the ball up to the five. Quarterback Dakota Burritt handed the ball to his right to White, who turned left and raced to the far pylon. White leaped over a diving Stag at the goal line and scored his third touchdown of the night. Kirby’s extra point sent the Thunder on to the state championship game and ended the Stags’ streak of six consecutive state titles.

“Football is a game of inches. That’s what we preach to our guys,” said Bishop Miege Head Coach Jon Holmes. “Hats off to St. James. They made one more play than we did tonight, and they won the game.”

“They’re a great team. I always go by the motto ‘In order to be the man, you gotta beat the man’. They were six-time state champs, and we had to step up and play our hearts out. And that’s what we did. We had to put ‘em down,” said White, who had 18 carries for 48 yards and three touchdowns. White has scored 12 touchdowns in four playoff games.

The result left the Stags (5-5) stunned. After a 2-4 regular season, they marched through the playoffs and expected to run into the Thunder again. This was a rematch from October 2nd when Bishop Miege beat St. James Academy 38-28.

“I don’t really know how to act right now. This doesn’t happen. I’m a senior. This is my last game,” said Dorsey. “Against a rival. A lot of mixed emotions. I mean, a hell of a game by them. They played a great game. We came up one point short.”

“They’re a good team. We had a dogfight with them the first time we played them,” said Holmes. “We knew they were going to be the ones. We felt like it was going to be us and them in the semifinals the whole entire year. Best of luck to them because I know they deserve to be there. I know they’re going to represent the East.”

The Thunder led 7-6 after the first quarter. White scored a one-yard touchdown on the opening drive. The Stags answered with a four-yard score by Conklin but missed the extra point.

In the second quarter, the Thunder faced a third-and-12 at the Bishop Miege 42. Burritt found a wide-open Ty Claiborne across the middle for a touchdown. St. James led 14-6.

Bishop Miege took the ball all the way down to the Thunder 1-yard line. On third-and-goal, Dorsey tossed it to Burch, who fumbled short of the goal line. Austin Bibler recovered for the Thunder at the one.

On first down, Burritt was taken down in the endzone for a safety.

“We let a guy come across our face up front, and that just messed up the whole blocking scheme,” said Radke.

The ball went back to the Stags after a free kick. Burch had a nice 17-yard run to the Thunder 2-yard line. On second-and-goal, Dorsey took the shotgun snap and tried to run a bootleg to his right.

“I ran the boot and saw La’James White coming off the edge,” said Dorsey. “I stopped and turned around and tried to make a play. And Logan Shull came up with the touchdown.”

The Stags grabbed their first lead 15-14 on Shull’s catch in the back of the endzone.

“They got some momentum right there, and they got a big play at the end of the half on a hitch-and-go. Moeller made a great play,” said Radke.

The Stags forced the Thunder to punt, and Bishop Miege took possession at their own 7-yard line with 1:39 left in the half. On the fourth play of the drive from the 19-yard line, Dorsey threw a deep ball to Mack Moeller. The Stags’ senior tight end, who was covered by White, had managed to get behind White on the hitch-and-go route.

“I looked off the safety, and then he flew left. So I just threw it over the top for him (Moeller) to make a play. He made a big-time play,” said Dorsey.

In the third quarter, the Stags were in position to pull away. On third-and-goal from the 8-yard line, Miege stacked three receivers on the left flank. Dorsey took the snap and tried to hit Moeller in the endzone, but Danny Walsh jumped in front of Moeller and intercepted the pass.

The Thunder then went 80 yards to tie the game. Burritt converted a third-and-21 with a 33-yard touchdown pass to Claiborne. They went for two, and Burritt rolled right and tossed it to White as he backpedaled into the endzone. The game was tied at 22-22.

Early in the fourth quarter, Bishop Miege put together a 78-yard drive to regain the lead. On second-and-seven from the Thunder 15, Dorsey ran down the left sideline for the go-ahead score. Inn his final game, Dorsey completed 21-25 passes for 219 yards, two touchdowns and an interception. He also had 16 carries for 68 yards.

St. James Academy took over at its own 25 with just under eight minutes remaining. White scored on a 5-yard touchdown on third-and-goal to knot the score at 29-29.

“Dakota (Burritt) made some big plays with his feet, and Jimmy punched it in on that last drive,” said Radke.

The Stags appeared to be in position to win another sub-state game, but Neenan’s field goal attempt as time expired was wide left.

For the first time since 2013, the Class 4A state champion will not be Bishop Miege.

“I told ‘them I love ‘em. The way these guys played. The way they came to practice every single day. The things they had to fight through this year,” said Holmes. “It’s an incredible program that we have here. Incredible community. None of that’s is going to change. Our expectations each year aren’t going to change.”

The Thunder now have the distinction of being the team that knocked the mighty Stags off their throne.

“We really wanted to play them. This is really for the alumni. Especially last year’s team who beat Miege and put a little chink in their armor and beat Aquinas,” said Radke.

The Stags were gracious in defeat.

“You can’t really put your head down. It was a great game. Great team effort,” said Dorsey. “They’re our rivals, but at the same time they’re a Catholic school. We’re really close with them and hopefully they win so they can go out with a big bang.”