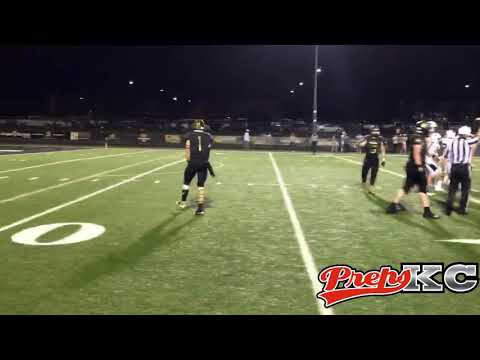 The Kansas Class 4A Regional between St. James Academy and no. 1 Paola began with a doozy, and the game turned out to be a doozy.

The Thunder struck quickly and led by 24 at halftime. The Panthers, fueled by a pair of Thunder turnovers, scored 28 points in the second half to pull within three points of St. James Academy early in the fourth quarter. But they couldn’t quite complete the comeback, and the Thunder handed Paola its first and only loss of the season, 45-35.

St. James Academy (5-4), the ninth seed in the East side of the Kansas Class 4A bracket, will visit fourth-seeded Basehor-Linwood (7-3) next Friday night in the Sectionals. The Panthers, whose opening playoff game last Friday against Ottawa was cancelled due to COVID-19, finished the season 9-1.

“Paola’s a great team. We knew they were going to put up a fight,” said St. James Academy running back La’James White. “But we knew if we came out and hit them in the mouth first, then we could play with a chip on our shoulder for the rest of the game.”

On the first play from scrimmage from their own 35-yard line, the Thunder ran “Doozy”. The fake double-reverse began with quarterback Dakota Burritt in shotgun formation handing the ball to White, who flipped it to wide receiver Hayes Manning. Manning tossed it back to Burritt, who saw Tyler Claiborne wide open down the middle of the field. Claiborne caught Burritt’s pass at the Paola 33. Claiborne was stripped of the ball inside the 10-yard line, but it bounced back into his hands in the endzone for a 65-yard touchdown pass.

“We’ve run it a couple of times this year. They executed it perfectly,” said St. James Academy Head Coach Tom Radke. “We knew they were going to ground and pound, so we really wanted to get up on them early and get them out of their game plan of holding the ball.”

Radke then called for an onside kick, which was recovered by Charlie Reece at the Paola 45. Six plays later, Burritt tossed the ball to White for a five-yard touchdown. The Thunder led 14-0 less than two minutes into the game.

When Paola finally got its hands on the football, the Panthers ran three plays and had to punt. Burritt gained 19 yards on a keeper to the Paola 33, then connected with Claiborne on a 12-yard pass. The Thunder settled for a 29-yard field goal by Josh Kirby, and it was 17-0.

The Panthers only scored once in the first half on an 80-yard drive late in the first quarter. On third-and-goal from the two, Jovanni Blackie was chopped down at the one. The Panthers lined up quickly on fourth-and-goal. Garrett called for a quick snap and pushed his way across the goal line to make it 17-7.

Burritt and Jake Boone connected on a 40-yard pass play to the Paola 40. White had a tough 11-yard run down to the four-yard line. After a holding penalty moved the ball to the 14, Burritt found Manning open in the endzone, and the Thunder led 24-7.

Paola moved the ball 78 yards on their next possession, but the Panthers needed 79. On third-and-goal from the two, Blackie was stopped at the one. Then on fourth-and-goal, Williams rolled to his right and spotted Jake Karr in the endzone. Williams’ pass was a bit behind Karr, and he couldn’t make the grab. St. James Academy took over at their own one-yard line.

Backed up in his own endzone, Burritt found Claiborne for a 22-yard gain. The senior, who completed 13 of 21 passes for 233 yards and two touchdowns, called his own number and gained 18 yards to the Paola 25 on a keeper. White finished the drive with a 14-yard touchdown run, and the Thunder led 31-7 at halftime.

“At halftime, our heads got a little bit big,” said White.

“First half we were clicking on all cylinders. Our passing game was great,” said Radke. “Dakota Burritt does a great job of spreading the ball around to all of our receivers, and Jimmy White is a stud out here on the football field. The first half went absolutely perfect the way we planned it.”

The second half did not.

Blackie returned the third quarter kickoff 31 yards to the 37-yard line. The Paola junior running back, who had 31 carries for 195 yards and two touchdowns, had a 47-yard run down to the Thunder 16. He capped the drive with a 10-yard run and stretched over the goal line for a touchdown.

The Paola defense started to turn up the heat on the St. James Academy quarterback. Karr sacked Burritt for a 13-yard loss. On third-and-22, Damarius Bassett and Isaac Brakner pressured Burritt into throwing the ball away, and the Thunder were forced to punt.

On his next possession, Burritt was intercepted by Williams, who returned the pick to the St. James Academy 44.

Fullback Fletcher Aude, who rushed for 101 yards, plowed ahead for an 11-yard gain to the Thunder four-yard line. On first-and-goal, Williams faked the handoff to Aude and took it in for the touchdown. It was 31-21 late in the third quarter.

Paola attempted an onside kick. The Panthers thought they had recovered the ball, but the refs saw it differently, and the Thunder took possession at their own 42. On the first play of the fourth quarter, they ran a draw for White. He scored an 11-yard touchdown to push the Thunder lead back to 38-21.

Paola answered quickly with a 72-yard drive powered by big runs by Blackie and Aude. Blackie scored on a three-yard sweep.

Leading by 10 with under 11 minutes left in the game, the Thunder turned it over again. White fumbled a toss from Burritt, and Aude recovered for Paola at the St. James 42. Paola cashed in when Aude scored his second touchdown of the night, and with 8:07 on the clock, the Panthers were within three at 38-35.

The Paola defense sacked Burritt again, and forced the Thunder to punt. The Panthers had momentum and with 6:35 remaining, plenty of time to milk the clock and take their first lead of the night.

On fourth-and-two from their own 36, Williams tossed a pass that was a bit high for Bo Robinson. The senior made a fingertip catch between two defenders for a seven-yard gain and a first down.

On third-and-nine from the 44, Williams found Robinson again, but the pass was complete for only six yards. It was now fourth-and-three at the 50 with 2:50 on the clock, and the Thunder were sure the Panthers were going to run a quick slant.

“They were doing it all game. It almost got to the point it was obvious,” said St. James Academy defensive back Holden Artzer. “They lined him up (Robinson) way outside, and they were running a slant every time on that fourth down. We had Jimmy (White) on the outside holding him down, and I had him from the inside. I just read it good.”

Artzer jumped the route and intercepted Williams’ pass. Artzer was chased down at the five-yard line, but he gave the Thunder a chance to put the game away.

White scored his fourth rushing touchdown of the night for the final margin of 45-35. The Thunder upset the number-one team in the state on their homefield.

“Last year and the year before, I was knocked off by Paola both years. I was like, this is a great team. I told everybody to respect them,” said White, who rushed for 163 yards. “I felt it in my heart. I felt for everybody on that team. I knew it was tough because we had to come out and fight. I respect every single player on that team and their coaches.”

“It’s been awhile since we got past this round. The next round would be the farthest we’ve gone in school history,” said Radke. “We get to back up to Basehor. They’re playing really good football now, so we’re just hoping to keep moving.”

This will be the second meeting this season between St. James Academy and Basehor-Linwood. The Thunder beat the Bobcats 42-35 back on September 25th in Basehor.