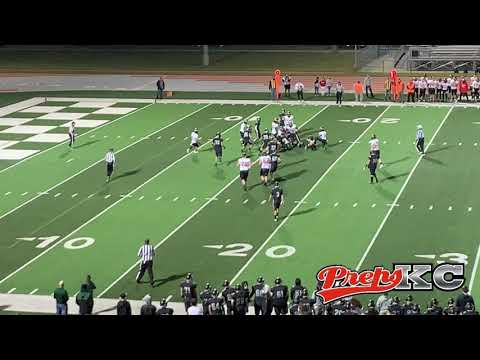 It seemed uncertain at times, but Staley found a way, beating Fort Osage 31-21 on Friday night at Staley High School.

Miscues were the story of the first 12 minutes with Fort Osage’s best drive ended on a turnover on downs, while Staley’s momentum was zapped by untimely penalties.

The Falcons managed to turn a shanked punt into points on a 30-yard field goal by Isaac Saye with less than one minute to play in the first quarter. Staley pushed the lead to double-digits on a 4-yard run by Davion Gravitt at the 9:50 mark of the second.

But, on the ensuing kick, Larenzo Fenner took it to the house for the Indians and it was 10-7, just 15 seconds later.

Staley’s special teams came up with a blocked punt and recovered it at the Fort Osage 20 at 3:03 of the second. The Falcons' second field goal of the first half appeared to move them within one at 14-13, but a penalty gave the home team a first down and they took advantage.

Gravitt's second rushing score of the half put the Falcons back on top 17-14 at halftime.

"We just had too many missed opportunities early," Staley head coach Phil Lite said. "We didn't take care of the ball and had some special teams’ breakdowns which is uncharacteristic for us, but our defense played a fantastic game. If there's one rivalry we have with anyone it's Staley and Fort (Osage). It's a big one, year in, year out, and you can throw out the records. It's a dog fight and we knew that."

Staley kept the pressure on to open the second half with a scoring drive on their first possession. Gravitt ran it in for the third time in the contest and it was 24-14 Staley.

At 9:44 of the fourth, the Falcons recovered a Fort Osage fumble in the end zone to go ahead 31-14 and the lead was never threatened the rest of the way.

Fort Osage added at late TD pass from Menne to Will Snodgrass with just over one-minute left in the game to account for the final margin.

Staley (7-4) advances in the Class 5 postseason and will play Park Hill South in a rematch from earlier this season. The Panthers defeated the Falcons 28-14 on October 2.

"A goal of ours as a team, was that we wanted another shot (at Park Hill South)," Lite said. "We didn't play very well that night and gave up 14 points before we really started playing. Our team is playing much more confidently in recent weeks and we're healthy for the most part. We feel like we're peaking at the right time."