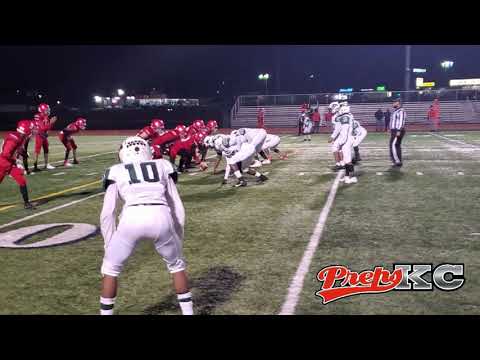 East couldn't get out of its own way. And Van Horn did just enough to keep the Bears in check.

Three times in the opening half of the Bears' Missouri Class 4 District 7 matchup at Van Horn, the visitors drove deep into Falcons territory.

If only the Bears could have capitalized. Instead, Van Horn stood tall, East came up empty each trip, and the Falcons escaped with a hard-earned 35-14 opening round district playoff win.

Up next for the fourth-seeded Falcons is a rematch with No. 1 seed Lincoln Prep, recipients of a first-round bye. The Blue Tigers, 6-2, downed Van Horn, 5-5, earlier this season in a chippy contest at William Chrisman.

The Falcons were dominated by Lincoln Prep 55-7 in Week 5. Head coach William Harris can hardly wait.

The Bears put up a gallant fight, which was expected. Head coach Greg Smith had his team prepared and they dominated the time of possession in the first half.

Led by their version of Mr. Do Everything, Chris Thornton, the Bears had Van Horn on its heel early.

The knockout blow never came, though. East trailed 7-0 at the half, but failed to capture much momentum until an explosive six-minute segment in the fourth quarter when the teams traded four touchdowns in a dizzying sequence.

The Bears finished the year 3-7.

"We were right there," Smith said. "Two heavyweight fighters going back and forth. We just couldn't come up with knockout punch."

Van Horn's only score in the first half came late in the second quarter on a short run by Arlandes Mitchell, the first of four touchdowns on the night for Mitchell.

East answered with a long drive. But a fourth-down pass to David Toban in the back of the endzone was ruled incomplete.

The halftime deficit wasn't much. But the Falcons held the Bears at bay.

Quarterback Sean Mitchell capped an impressive drive to begin the third quarter with a 16-yard touchdown pass to Da'Marcus Penson, who also nabbed an interception on defense.

Less than four minutes into the third, the Falcons seemingly reclaimed their dominance.

But on its fifth trip to the red zone, the Bears finally brought through on a 12-yard run by Thornton with less than 7 minutes to go.

From there, things got wild. Powered by a 65-yard scoring burst up the middle from Arlandes Mitchell, Van Horn went up 21-6 with 6 minutes, 35 seconds remaining in the game.

East answered with a 58-yard jaunt from running back Deion Miles, which brought the Bears back to life. An improbable 2-point conversion run cut the deficit to 21-14 with 6:09 left.

Arlandes Mitchell's 34-yard dagger with less than four minutes left put an end to any upset hopes. He completed the night with a scintillating 38-yard touchdown run to send the Falcons on their way to the district semifinal.