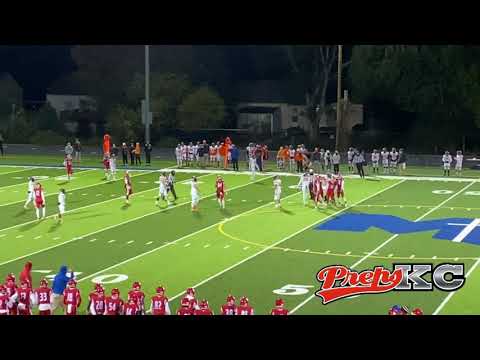 The success of Shawnee Mission Northwest’s passing attack has been well-documented this season, but the Cougars wanted to prove that they’re much more than that on Friday night against Bishop Miege.

The Cougars got their running game going in the second half and had turned a three-point deficit into and 11-point lead in the opening minutes of the fourth quarter thanks in large part to a Phillip Adams interception. That combo helped the Cougars claim a 27-24 win over the Stags in their regular season finale.

“It felt really good. It was another quality opponent and game to pick up with the history of Miege football and what a quality football program it is and quality kids and coaching staff,” Shawnee Mission Northwest coach Bo Black said. “To come in here and compete the way we did and find a way to win was a good win for our program.”

Northwest trailed 16-13 after three quarters, but took the lead just four seconds into the fourth on a Ty Black quarterback sneak on 4th and goal from inside the 1-yard line. Black didn’t have much time to rest after the score, as Adams’ interception two plays later gave the Cougars the ball right back at the Miege 4-yard line.

Justin Mitchell found pay dirt on the following play to push the Northwest lead to 27-16. Mitchell did most of the Cougars’ damage on the ground with 92 yards and the touchdown on 17 carries. The SM Northwest senior also hauled in seven receptions for 64 yards.

“That definitely shows us that we have some versatility and people can’t just prepare for the pass and not expect to get ran up the middle,” Mitchell said. “It’s great looking forward that teams have to look at both.”

The Stags still trailed by 11 mid way through the fourth quarter, but the tandem of quarterback Timothy Dorsey and his top target Mack Moeller didn’t let the Stags go down without a fight. With the Stags facing a third and long inside their own 20, Dorsey found Moeller for an 18-yard completion to keep the drive alive. Miege went on to score on a 3-yard run by Jaylen Burch and Dorsey made it a three-point game with his 2-point conversion run with 3:17 to play.

The Stags had a chance to get the ball back with less than two minutes left, but Black scampered 29 yards on 3rd and 5 from the Miege 46 to put the game away.

The SM Northwest quarterback wasn’t too far behind Mitchell in pacing the Cougars’ rushing attack. Black carried it 19 times for 81 yards and a touchdown to go along with completing 19 of 29 passes for 227 yards and two scores.

Both of Black’s touchdown passes went to Jack Meylan in the first half. Meylan had a team-high 79 receiving yards on five receptions.

“Those were two big touchdowns because they set the tone early in the game,” Ty Black said. “We just practice and practice, throw and catch in practice all week and it turns out in the game. It was pretty good.”

Dorsey’s passing stat line was nearly identical to Black’s, as he completed 16 of his 26 passes for 237 yards. The Miege signal caller connected with Moeller on a shovel pass on the Stags’ opening drive, and the 6-foot-3 tight end did the rest, breaking a tackle and rumbling 57 yards for the first score of the night. Moeller highlighted the Stags offense with six catches for 114 yards.

The Stags’ second score came on a Dorsey 3-yard touchdown run to even the game at 13-13 with 8:08 to play in the second quarter Miege took a 16-13 lead on a 35-yard field goal by Logan Shull as time expired in the first half. That score held until Black’s 1-yard QB keeper to begin the fourth quarter.

The win for the Cougars pushed their record to 5-1 going into the Class 6A playoffs. The Stags will enter the 4A playoffs at 2-4 as they continue their quest for a seventh consecutive state title.