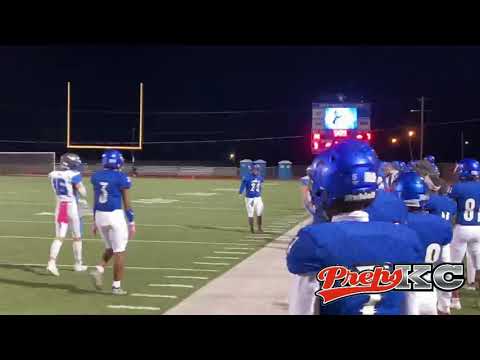 With precious seconds ticking away in a tie game against Grain Valley, Raytown running back Zhamari Gary had a decision to make as he took a pitch from quarterback Nate Whitebear.

The Bluejays were out of timeouts on the third-and-three running play from the Eagle 22-yard line, and there were less than 20 seconds in the game, as the clock was still running from the previous play. Should he try and get to the sideline to stop the clock? Or cut the ball back up the field? It was an easy decision for Gary.

“I wanted to score,” Gary said. “I didn’t want to settle for a field goal. I wanted to put the game away for my team.”

That’s exactly what he did.

Gary found just enough daylight as he cut the ball back up the field and sprinted into the end zone for the game-winning touchdown with 4.9 seconds left, cementing a 21-14 win for the Blue Jays.

“Once it (the ball) got put on the hash (after the previous play) it was chaos,” Raytown head coach Logan Minnick said of the final 30 seconds. “I thought if he (Gary) got a first down, we’d have time to spike it and get the field goal team out there.”

Luckily for the Bluejays, they didn’t have to worry about that scenario. Gary’s run was a fitting way for them to get their biggest win of the season and move to 5-3.

In what was a physical game, it was the Raytown offensive line that set the tone throughout. The Blue Jays rushed for more than 350 yards, and Gary himself finished with 255 on 32 carries.

“We just keep pounding it,” Gary said. “We don’t feel like anybody can stand up to our O-line. Props to them and our other backs.”

After the Raytown defense forced a Grain Valley punt to start the game, the offense came out and let its offensive line go to work. They put together an 18-play drive, converting once on third down and three times on fourth down. Freddy Ersery capped the drive with a 1-yard touchdown run.

“We overran and underran some plays,” Eagles head coach David Allie said of the defense. “We were trying to get through the trees up front. They have some big kids up front and athletes to get the ball to. They did a good job of holding the football. They ground it out.”

The Eagles responded quickly, scoring in less than 2 minutes when quarterback Cole Keller found Parker Bosserman for a 33-yard touchdown pass to make it 7-7.

That remained the score until early in the third quarter when Gary struck again, this time on a 34-yard run on fourth-and-one to make it 14-7.

But once again the Eagles responded, as running back Jaxon Wyatt started to get big chunks on the ground. That set up Keller finding Parker Stone on a 9-yard touchdown pass to make it 14-all.

Both teams had chances to take the lead in the fourth quarter, as Grain Valley had a field goal come up short, and the Bluejays turned the ball over on downs inside the Eagle 15-yard line. The latter gave Grain Valley the ball on its own 12 with a little more than 3 minutes left to play.

After a Keller first-down run, he tried to get the ball to his fullback over the middle but was intercepted by Isaac Yzaguirre, which set up the game-winning drive.

“I had the tight end. He started to block, and the full back came out,” Yzaguirre said. “I was waiting for that all game. I just cut the route off.”

Added Minnick: “He’s (Yzaguirre) a film rat with that kind of stuff. He probably made that play in his sleep all week.”

Slowing down Keller was a key to Raytown’s success, as the senior standout was just 5-of-10 for 59 yards and two interceptions through the air, while gaining 72 yards on the ground.

“They’re big and fast,” Allie said of the Raytown defense. “They had a guy spying on him (Keller). They didn’t let him break big plays, and they did a good job rallying to the ball. … We have to find an answer if they take away the quarterback.”

The Eagles dropped to 7-1 on the season and will host undefeated Belton next Friday night. Raytown travels to Truman and will look for its third win in a row after two straight defeats.

“Losing those games has made us come together as a team,” Gary said. “We’ve gotten on the same page. It’s great for our confidence to get a win over a great team.”