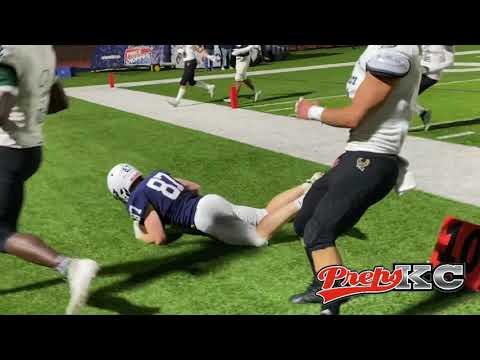 Stop me if you’ve heard this before: Mill Valley dominated…

From the opening kickoff where Jacob Hartman took it 72 yards to set up the first drive to the final whistle, which saw the final score read 52-0, the Jaguars were in total control against Free State.

Making his first start for the Jaguars with Cooper Marsh sidelined for a few weeks, sophomore Hayden Jay showed jitters on the first drive as they couldn’t advance the ball after Hartman’s return and settled for a 39-yard field goal attempt by Chris Tennant, which he pushed right.

After that, Jay locked in and led successful drive after successful drive. He completed 9 of 14 passing for 135 yards and a TD – a 53-yard catch and run by Hartman. Jay also added two scores on the ground.

But the offensive show belonged to Quin Wittenauer, who ran for 166 yards and four scores on 21 carries.

Every score he had to work for as he bounced off defenders and broke tackles. His first score was a 14-yard run. His second TD was a one-yard plunge that was set up by his 18-yard run where he was bottled up at the line up the middle and then bounced it to the right before turning on the jets.

His third touchdown might have been the play of the night, though. He started going right, shed a tackle, bounced the run back up the middle, jumped over a defender's diving tackle before plowing into the back of a referee at the 10-yard line. Two Free State defenders put on the breaks, while Wittenauer hit the gas and beat them to the corner.

His final score was a four-yard run up the middle to initiate the running clock, which prior to last week, hadn’t happened to Free State since the early 2000s.

Wittenauer had another touchdown that was taken back for a holding, which was one of two scores on the night erased by yellow flags. The other was a Jay pass to Jared Napoli for 47 yards, but that came back because of a blindside block.

The 0-4 start is the worst for the Firebirds since they started 0-3 in 2015 where they then ran the table the rest of the way before losing to Derby in the Class 6A semifinals.

Not much went right for Free State as they amassed 108 total yards of offense and they didn’t cross midfield until 3:32 left in the fourth quarter. The Mill Valley line pushed Free State around and didn’t give Jet Dineen enough time to find his receivers. He had to scramble or throw the ball away. He completed 4 of 12 passing for 56 yards.

To put Free State’s night into a microcosm, coming out of halftime Free State received the ball, but a short pooch kick that was rolling toward the sideline was picked up and downed at the one. Free State was then called for a delay of game and two false starts before running a play that Dineen was forced to throw away. On the next play Dineen scambled for a 32-yard run.

It was a burn-the-tape kind of night for Free State in a game that Mill Valley dominated.