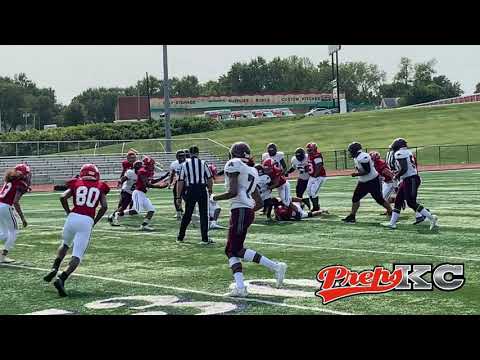 It’s only the fourth week of the season, but Hogan Prep’s 28-21 come-from-behind win over Van Horn may have provided the wildest ending to a game thus far.

A 99-yard touchdown by the Falcons, followed by a 4th-down Hail Mary by Hogan Prep and a fumble recovery by the Rams to seal the win on the ensuing kick all happening in the final 1:09 of the game. On top of all of that, it was the 200th victory for Hogan Prep head coach Phil Lascuola.

"Despite the final score, it was definitely a defensive battle," Lascuola said. "They got the tipped ball and I was thinking you've got to be kidding me, but then we got the same kind of luck or help, whatever you want to call it. We worked for it and it just happened to be our day today."

Defense sparked the Falcons’ first score of the game. A fumble recovery shifted early momentum to Van Horn and Arlandes Mitchell took a double-reverse and outran the Hogan Prep defense for 57 yards and the 7-0 lead midway through the first quarter.

Less than one minute into the second, Hogan Prep forced a turnover of their own recovering a fumble at the Falcons’ 35. The ensuing drive resulted in a 2-yard touchdown run on 4th-and-goal to pull the Rams within one at 7-6. Hogan Prep’s attempt to take the lead was denied on a two-point conversion and Van Horn led 7-6 with 8:02 left in the first half.

Van Horn made another splash play to extend the lead with less than five minutes remaining in the second quarter. Sean Mitchell called his own number and sliced through the middle of the Rams’ defense on a 43-yard quarterback keeper giving the Falcons a 14-6 lead.

Turnovers were again a storyline in the second half after Hogan Prep (2-2) recovered a fumble at 5:30 of the third quarter and turned it into points. Darrayan Matthews' 45-yard TD pass to Dyimond Walker moved the Rams to within two (14-12). Hogan Prep, who scored 20 points off turnovers, was able to tie the game on the two-point conversion and it was 14-14.

"We really don't do much as far as stripping the ball in practice, but we work on wrapping and bringing our arms through," Lascuola said of his team's ability to force turnovers against Van Horn. "It's really just the kids came up and made plays. Defense has been playing well all year and the offense came through today."

The Rams recovered yet another fumble just seconds later at the Van Horn 10. Hogan Prep went back to Walker, who hauled in a 20-yard fade in the end zone on third down to give the Rams their first lead of the game (20-14), heading into the fourth quarter.

"I wasn't sure what was going to happen coming in, I knew they (Van Horn) were a good team and we're a good team, even though we were 1-2. We played some tough competition and our guys came out and played hard today."