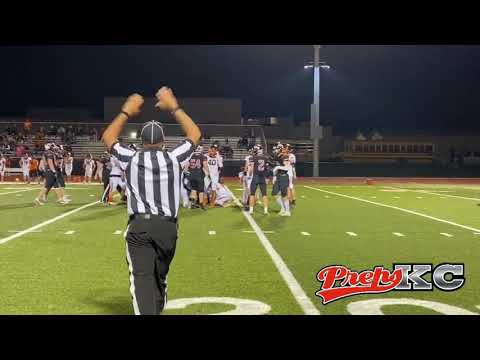 Complete Stats and play by play

Even the best of football teams can fall into a funk now and then. And Odessa certainly started out in one Friday night.

Odessa’s first drive against long-time rival Oak Grove lasted exactly one play and ended with an interception. While the Bulldogs struggled find some offensive footing, Oak Grove put together a long scoring drive.

Odessa was in need of a turnaround play. And the Bulldogs got it. Brett Duncan returned the ensuing kickoff 99 yards for a touchdown, and after that it was all Odessa in a 42-6 victory on the Bulldogs’ home field.

“We needed a big play,” Odessa quarterback Brenden Jeffrey said. “Brett Duncan really came through and we sealed the deal after that.”

Odessa (4-0, 1-0 Missouri River Valley West) didn’t look like a defending state champion in the early going, let alone a team that is 30-1 since 2017 and outscored its first three opponents 122-50. After holding Oak Grove (3-1, 0-1) to a three-and-out, Odessa gave the ball right back to the Panthers when Jeffrey threw a ball over the middle to Oak Grove defensive back Ricardo Delgado.

Oak Grove couldn’t capitalize on Delgado’s pick, but the Panthers started rolling late in the first quarter. The Panthers went 80 yards in 19 plays and took a 6-0 lead when running back Adrian Whitehead crashed in from a yard out on fourth and goal.

That lead lasted as long as it took Duncan to field the kickoff at the goal line, find a hole up the middle and sprint down the left sideline.

“The kicking game really gave us a lot of momentum,” Odessa coach Mark Thomas said. “But we really challenged our players in the second half. We didn’t feel like we played like we were capable in the first half on either side of the ball.”

Oak Grove finished with more total yardage (308-284) and nearly twice as many plays (68-32) but was never in the game after running back Blake Heitman scored from 8 yards out following a nearly blocked punt late in the second quarter. Heitman, a junior, led the Bulldogs’ balanced backfield with 88 rushing yards on 12 carries.

Odessa scored every time it touched the ball in the second half, starting with the first of Jeffrey’s two rushing TDs on a 30-yard run. Running back Shon Badder followed with 29- and 4-yard TDs and Jeffery put the game in running clock territory with a 15-yard keeper in the fourth quarter.

“We just didn’t play very well the first half,” Jeffrey said. “We came out flat. But in the second half we were ready to go.”

A tough night for Oak Grove grew tougher when Whitehead suffered a knee injury in the third quarter. The game stopped for several minutes as Whitehead was placed on a stretcher and taken off the field.