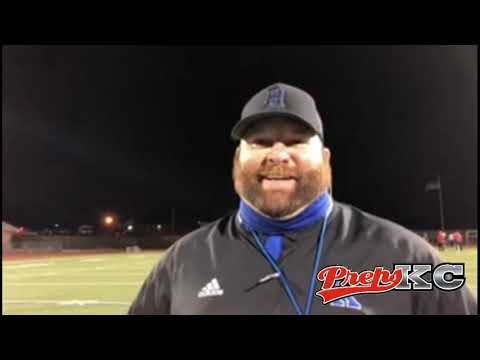 Raytown is slowly rounding into form and just in the nick of time, too.

With a matchup against St. Thomas Aquinas looming on the horizon, the Bluejays (3-1), dismantled a young Fort Osage squad 52-14, behind a dynamic three headed monster led by sophomores Freddy Ersery and Nate Whitebear.

And with the emergence of senior wide receiver Noah Lang, Raytown coach Logan Minnick likes what he sees, especially on offense.

“As well as we run the ball if we could be more balanced up front. … I think that makes us hard to defend,“ Minnick said. “Week One with a sophomore quarterback, you don’t know how many times you want to put it in the air. He (Whitebear), has done a great job all four weeks now.”

Raytown opened the scoring midway through the first quarter as aforementioned Ersery scored his first of three touchdowns on the night with a 19-yard run.

After forcing a Fort Osage punt, the Bluejays’ offense left off on their previous drive. Facing a third-and-12, Minnick dialed up the perfect play — a screen.

Whitebear took the snap, drifted to his left and lobbed the ball to Ersery. Ersery shook off several Fort Osage defenders and waltzed his way into the end zone 49 yards later.

Raytown wasn’t done. This time, it was the defense, not the offense, that stole the show as Deshon Collins intercepted a Greg Menne pass and returned 70 yards for the touchdown to give the Bluejays a commanding 21-0 lead.

Looking for momentum, Fort Osage turned Menne, who rebounded nicely from the interception on the previous drive, by throwing a 39-yard touchdown to Will Snodgrass.

The momentum didn’t last long though as Raytown found the end zone on its first play on its ensuing drive as Whitebear connected with Lang for an 85-yard touchdown.

“It was huge,” Minnick said. “Great throw by Nate. Great protection up front by all the bigs. We just thought ‘Gosh, we’ve got one-on-one over there with Noah’ … Noah can go, he can fly.

“He’s been telling me for weeks ‘Coach, I need the ball more.’ Any time you can get a big play right after they (the opposing team) score is huge.”

Fort Osage threatened to make a game out of it late in the first half. After downing a punt inside the 1-yard line, the Indians defense stripped the ball out of Quelann Coleman’s hands and recovered in the end zone. Two plays later, Fort Osage’s defense was at it again, this time, it was Roman Tillmon who intercepted Whitebear’s pass, giving Fort Osage life with 9.5 seconds left in the half.

However, it wasn’t meant to be, as Fort Osage’s Larenzo Fenner got tripped up at the 5-yard line, after pulling down a quick pass from Menne, as time expired in the first half.

“That’s pretty wild,” Minnick said of the ending to the first half. “Obviously there at the end you don’t put one in the air and give them a shot to (score at the end of the half).”

With the win, Raytown will turn its attention to St. Thomas Aquinas, while Fort Osage will host Belton.