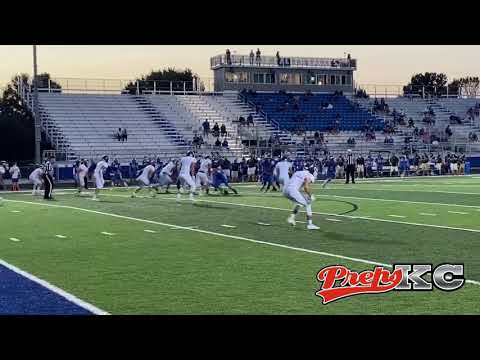 The Grain Valley and Oak Park offenses both put up 30-plus points last week, but Friday night’s game between the two teams started as a defensive battle.

The Eagles held a 7-0 halftime lead, but quarterback Cole Keller put the offenses struggles squarely on his shoulders.

“I was doing a lot of overthinking,” Keller said. “I was being selfish; not making the right reads and trying too hard to make something happen. I had to calm down and let the guys around me make plays, too. I had to trust the process.”

Trusting the process turned out to be a good plan.

While the Eagle defense continued to dominate, Keller and the offense exploded to the tune of four third-quarter touchdowns to help them cruise to a 36-6 victory.

“With (Oak Park’s) type of defense, they’re gangbusters,” Grain Valley head coach David Allie said. “But there are also some cracks to exploit and get some big plays. They brought the heat, and we weren’t blocking in the first half. But we really established the running game in the second half.”

The Eagle offense struck early and often in the third quarter.

On their second play of the half, Keller sprinted for an 86-yard touchdown run. The two-point conversion made it 15-0.

Oak Park went three-and-out on its ensuing drive and the snap on the punt was high and Grain Valley recovered on the Northmen 25-yard line.

On the very next play, Keller found Parker Bosserman on an impressive leaping grab in the end zone. Three plays and a little more than 2 minutes into the second half and all of a sudden it was 22-0.

“It was a matter of when was it going to happen,” Keller said of the big plays on offense. “We knew it was there. We were waiting. Once the ball got rolling it didn’t stop.”

The Eagles exerted their dominance up front on their next drive, as Jaxon Wyatt, Hunter Newsome and Keller combined for nine straight runs for 62 yards. Wyatt carried most of the load, but Keller capped the drive with a 6-yard score.

Wyatt wouldn’t be left out of the scoring, though, scampering 83 yards for a touchdown on the next Eagle drive to make it 36-0 late in the third quarter.

Wyatt and Keller led the way on the ground with 155 and 135 yards, respectively, while Newsom and Zach Kirk also did some damage.

“That’s the way it was last week and the way it will be all season,” Allie said. “Each one brings something different to the table. Jaxon surprised us with that speed (on his touchdown). On the previous drive he did all the work and then Cole got the touchdown, so he just took it to the house in one play.”

Not be lost in the offensive explosion was an impressive performance by the defense.

A week after the Northmen scored 33 points and got 193 yards from KeAndre Braxton, the running game was almost non-existent against the Eagles.

Braxton could never get going, rushing for just 30 yards on 20 carries. The Northmen offense as a whole could only muster 146 yards.

“They are big and physical,” Allie said of Oak Park. “You have to stop the run. Our defense got us the ball in the first half. They got some turnovers and multiple three-and-outs. The defense played a total game. The defensive staff did a great job with the scheme. This game was going to be won or lost up front. The front four guys did a great job and Hunter Newsom cleaned things up at linebacker.”

Keller echoed his coach’s sentiment about the defense.

“It was an incredible job by the defense,” he said. “I told one of our defensive coaches that the offensive player of the game was our defense.”

The Eagles improved to 2-0 on the season and will look to stay perfect next week when they travel to Park Hill South. Oak Park, now 0-2, will try and get in the win column when they host Truman.