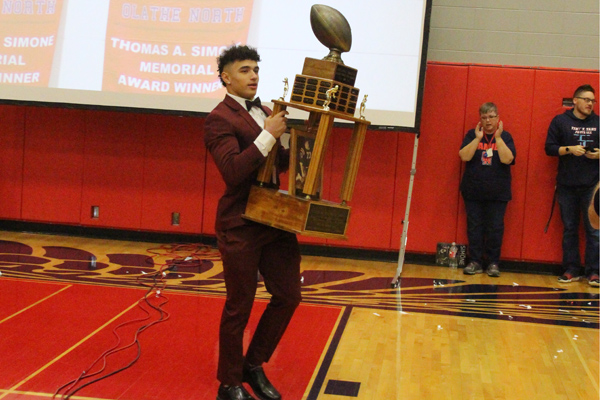 Thursday at Olathe North the high school football community gathered to honor the top players across the Metro at the 37th Annual Thomas A. Simone Awards.

North hosted the event for a record seventh time as junior running back Arland Bruce the IV took home the Thomas A. Simone Award as the top high school football player in the Kansas City area. He finished his season with 2,487 yards and 43 touchdowns on the ground. Helped Olathe North to an appearance in the Kansas Class 6-A title game. His father, Arland Bruce, III, won the 1995 Simone Award.

The winner of the Frank Fontana Award recognizing the most outstanding small class (MO 1-4, KS 1A-4A) football player in the metro was won by Odessa’s Jose Meierarend. He finished his senior year with 2,566 passing yards, 37 touchdowns and just four interceptions while completing 70 percent of his passes. Odessa won the Missouri Class 3 state title, the school’s first in 25 years, with a perfect 15-0 record while averaging 55 points per game.

The winner of the Junious “Buck” Buchanan Memorial Award given to the best lineman/linebacker in Missouri’s and Kansas’ top two classes (MO 5-6, KS 5A-6A) was Johnny Wilson of Park Hill. Wilson made 97 tackles with an astounding 44 of them coming for a loss. He had 13 sacks and was named Suburban Gold Conference Defensive Player of the Year.

The winner of the Bobby Bell Award will be given to the best lineman/linebacker in Missouri’s and Kansas’ smallest four classes (MO 1-4, KS 1A-4A) was Platte County’s Garret Watson. The senior led Bell candidates with 16 sacks, finishing with 79 total tackles and was named the Suburban Blue Defensive Player of the Year.

The winner of the Otis Taylor Award will be given to the top tight end/wide receiver in the metro area was Bishop Miege’s Daniel Jackson. The senior hauled in 74 catches for 1,511 yards and a Kansas state record 27 touchdowns for the Kansas Class 4-A champs.

In other awards Lincoln College Prep’s William Lowe was named the Chiefs Eric Driskell Coach of the Year. Lincoln Prep also earned both the offensive and defensive Interscholastic League players of the year with Howard Brown earning the offensive honor and Jermaine Hamilton-Jordan taking home the defensive award.