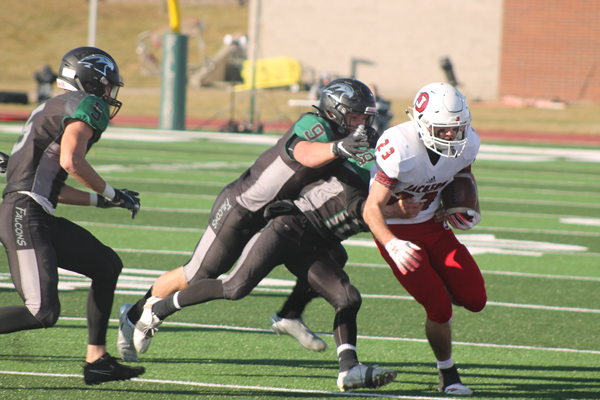 Last week in its Class 5 state quarterfinal win over Raytown, Staley was the more physical team that controlled the line of scrimmage. Saturday afternoon with a trip to the state championship game on the line against undefeated Jackson, the Falcons met their match.

The Indians finished with 200 more rushing yards than the Falcons on the day, forcing Staley and backup quarterback Jehr Folwer to try and make plays through the air on a windy day. It all added up to a 20-7 Jackson victory.

“We knew going in it was going to be a physical game. They are big up front,” Staley head coach Phil Lite said. “(Our defense) held up for a while. They made some plays. We just missed some opportunities on the offensive side of the ball. It was just a lack of execution. We weren’t able to control the line of scrimmage.”

Despite being outgained, losing the time of possession and the turnover battle, late in the third quarter the Falcons were able to take a 7-6 lead on the back of an impressive punt return touchdown from David Lewis.

“I just saw open grass, and I ran like hell,” Lewis said after he eluded a Jackson tackler with a spin move. “Coach told me to run up the middle because their gunners go the outside. A hole opened up for me.”

“What a tremendous run by David,” Lite said.

The touchdown had been set up by a defensive three-and-out. With the quarter winding down and the Falcons having the wind at their backs in the quarter, Lite chose to call a timeout before the punt to preserve clock.

After Lewis’s return, the defense answered the call again, forcing another three-and-out, and Lite used his two remaining timeouts to force another Jackson punt into the wind. It once again paid off, as the Falcons got the ball at the Jackson 45. They advanced to the Indian 21 by the end of the quarter.

Staley had a chance to extend their lead but playing into the wind continued to stifle the Falcon offense. They ended up turning the ball over on downs after a pair of incompletions.

“We got what we wanted,” Lite said. “We took a chance to use our timeouts to try and control the field position. We felt like we had some plays we were going to go to. We just couldn’t connect in the passing game.”

The two teams traded punts before Jackson finally took the lead for good.

After controlling time of possession with a strong rushing attack, Jackson’s biggest play came through the air. Quarterback Cael Welker found a wide-open Luke Starzinger for a 50-yard catch-and-run down to the Staley 1. Welker ran in the for a touchdown on the next play to give the Indians a 14-7 lead after the two-point conversion.

“It was just a miscommunication by us,” Lewis said of the big pass play.

The defense had done just about everything they could to keep the Falcons in the game. The Indians caught them off guard from the start, going with a run-heavy offense, something they hadn’t seen on film. It paid off in the first half, although they led just 6-0 at the half, but the Staley defense came out energized in the second half.

“We were expecting them to throw a lot more,” lineman Nick Wright said. “I felt like we adjusted better (in the second half). We just had a few blown assignments.”

The offense had one final shot to get the game tied but a pair of holding penalties were damaging. One erased a nice kickoff return, while the other put them in a third-and-long situation they were unable to overcome. They got it to fourth-and-four but Fowler’s pass fell incomplete.

“There’s a sense of urgency in these games. Every snap counts. We made too many mistakes,” Lite said, as the offense specifically finished with three turnovers.

The loss wrapped up a 10-3 season for the Falcons in which a number of new players had to step in after several players were lost to graduation.

“Nobody expected us to be 10-3 and in the semifinals with the seniors we lost,” Lite said. “We had some adversity this year, too. There was a span of three or four games where we had five or six starters out, and it was next man up. Credit to the kids and the coaches because it could have gone south on us.”