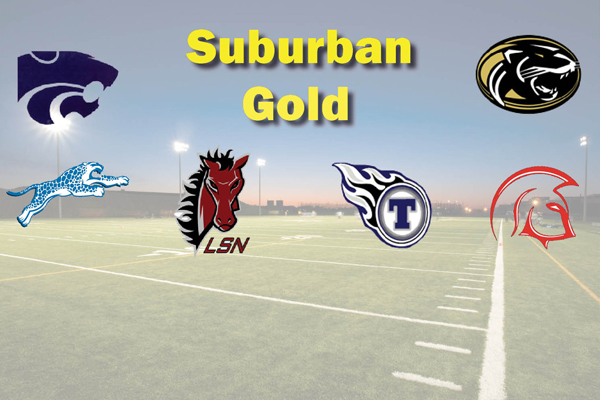 The Suburban Gold is the best Class 6 conference in the state of Missouri. A team from this league has played for a Class 6 State championship 10 of the 16 times since Class 6 began in 2002.

The depth of the league means that sometimes teams may not have great regular season records, but those teams are tough outs come playoff time.

This year should be another outstanding season of football in the Suburban Gold. While some fantastic players have graduated there are certainly more to come.

Here is a quick look at each team in the Suburban Gold.

Biggest Challenge: Some big-time players graduated off a team that went to back to back state championship games but there are some good players ready to step in. While there is talent back some key spots like quarterback and defensive line will need to gain some game experience.

Outlook: The Wildcats are one of the elite programs in the state and rarely take a big step back. Even when it struggled at the start of the 2015 season Blue Springs still rallied to advance to the district championship game. The Wildcats boast one of the best tailbacks in the Metro in Aveion Bailey and he could put up big numbers behind a good offensive line that includes all-stater Conrad Rowley. The defense only has three starters, but Nikko Manning is a standout on the defensive line Austin Stuller is a good returning linebacker. The Wildcats may not be the odds-on pick to win the league, but they should be in the hunt with several other talented teams.

Coach’s thoughts: “This is just one of those groups that in terms of intangibles and the important characteristic of really getting along and caring for each other we have that in this group and I love coaching a team like this.”

Biggest Challenge: The Jaguars struggled to start last season but played some of their best football down the stretch winning a two road playoff games and advancing to the district championship game before losing to rival Blue Springs. Injuries were a problem early which allowed a lot of younger players to step up and see important minutes on the varsity level. Those players must now take the leadership role for South as it looks to climb to the top half of the league.

Outlook: Blue Springs South brings back some good players in key positions led by tailback Austin Terry. He rushed for more than 1,200 yards last season while scoring 16 touchdowns. Look for a big year from Terry in 2018. South has always been known as a strong defensive team and this year should be no different. Isaac Pena anchors the defensive line and along with linebacker Skyler Meyers South’s defense could be one of the better units in the Metro. The Jaguars could be poised for a bounce back season and could challenge for the league title.

Coach’s thoughts: “This is just a tough-minded group that’s not afraid of hard work. A lot of these guys were starting early last year and more than anything they learned what it takes to compete at this level and we are awfully excited about what we have coming.”

Biggest Challenge: The Broncos are coming off a non-losing season for the first time since finishing 5-5 in 2005. There are eight starters back on both sides of the ball and North is being talked about as a team to watch. Dealing with expectations for the first time since before these players had even started going to school is something to keep an eye on. The Suburban Gold doesn’t allow teams to just cruise on their reputation so there is work still to do for the Broncos.

Outlook: There are several standout players that are returning for their senior year led by quarterback Christian Carter, tailbacks John Eldridge and Ontario Russell and receiver Devon Richardson. The defense is strong as well with only three starters not coming back. This group has had the speed but now is adding more size that could help it weather the brutal Suburban Gold schedule.

Coach’s thoughts: “There are a lot of expectations and a lot of excitement. It’s uncharted territory for us with people being excited and having an expectation for Lee’s Summit North football so that makes it even more exciting because it’s new and it’s different. The school is ready. The administration is ready, and I think the community is ready, so we are locked and loaded.”

Biggest Challenge: West’s defense is always a strong unit, but it will again be undersized from past teams. The Titans have not let that become a problem the last couple of years and will rely on their speed to make up for any size differences.

Outlook: The Titans are coming off another strong season but just haven’t been able to break through and make it past the district title game in their four years in Class 6. West has a strong offensive group back even with the graduation of Simone Award finalist Phillip Brooks. Senior quarterback Ben Kobel and senior receiver Cade Clemons are back along with junior receiver Sammy Cooper. Those three along with other good talent on the offensive side should make the West a hard team to stop. In what is looking like one of the most wide-open seasons in Missouri Class 6 in Kansas City the Titans could be poised for that breakout year.

Coach’s thoughts: “You have to have depth. Our numbers are good and at some key positions we have quality backups and that’s what it’s going to take. You have to have those quality guys to make it through the gauntlet like the Suburban Six.”

Biggest Challenge: The Trojans graduated a 3,000-yard passer in Billy Maples, a Simone winner in Ronnie Bell along with some other key offensive players. Those losses are key but there are good young players who could step up and fill the voids.

Outlook: The defense could be very good with returners like junior defensive end Johnny Wilson along with several other returning starters. That defense will be key as new quarterback Kolby Heinerikson gets used to being the signal caller. Park Hill has made an easy transition to Class 6 and now will be tested to see if that was because of depth of talent or a good couple of classes that has moved on to the college ranks.

Coach’s thoughts: “This year’s team has great attitude. They are coming off a state semifinal appearance and a conference championship. So, they come in with a lot of eyes on them and they really embraced that idea. They really got after in the winter and the spring in the weight room and the training phase of the game.

Biggest Challenge: It was a strange year for Raymore-Peculiar to say the least. The Panthers fell to 2-8 going winless in the Suburban Gold conference for the first time since 2011. That is a tough year to shake off and with another tough schedule Ray-Pec will have to clear their memories of a lost 2017.

Outlook: There is a big senior class with a lot of starters returning. Overall numbers are good as well with senior depth on the offensive and defensive line. While it was a bad season the Panthers played better the last few games of the season including losing in overtime to Lee’s Summit West in the first round of district play in what would have been one of the few 1 vs. 8 upsets in Missouri since the new playoff format started in 2012. Raymore-Peculiar should be improved which means it is another team that be a tough out every week.

Coach’s thoughts: “What we did a year ago really just isn’t the Ray-Pec way in a number of ways. We’ve taken a good look at where we were at and we did play good down the stretch. We were competitive with Blue Springs and Park Hill and almost knocked off Lee’s Summit West. We were becoming the team we thought we could be down the stretch. With the number of these guys coming back I think that gives us some confidence going into this season.”